One of Japanese architect Kazuo Shinohara’s iconic architectures, designed according to the so-called “first style”, has now been rebuilt on the Vitra Campus in Weil am Rhein. The Umbrella House, originally built in Tokyo in 1961, will serve as a venue for small on-campus gatherings, giving visitors a taste of modern Japanese architecture. After the geodesic dome by Buckminster Fuller/George Howard in 1975 and a gas station by Jean Prouvé in 1953, the project is the third historic building to be rebuilt on the Vitra Campus. 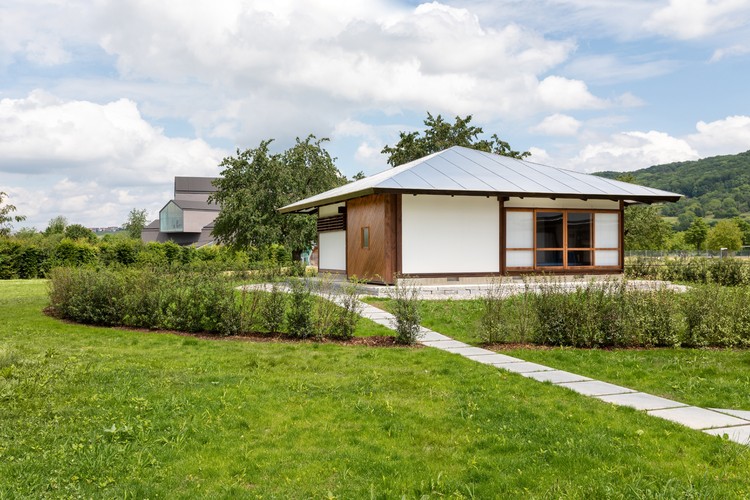 Born in 1925, Kazuo Shinohara is considered one of the most important Japanese architects of the second half of the 20th century. Although not as internationally known, his work has influenced architects such as Toyo Ito and Kazuyo Sejima.

The wooden house, with a square plan, offered enough space for a small family under its “umbrella” roof. Shinohara was inspired by the traditional vernacular architecture of Japanese houses and temples, using their various patterns, such as the pyramid-shaped roof form used in the Umbrella House, which had previously only been seen in the temple complexes. When constructing the house, Shinohara used simple and inexpensive materials, such as local wooden elements and cement fiberboard on the facade.

Shinohara divided his work into four styles, each addressing different issues and challenges. The Umbrella House was built in Nerima, a residential area of ​​Tokyo, and is the smallest and one of the last remaining residences of its first style. The 55 m² floor area includes a kitchen and dining table, a living room, a bathroom and a traditional tatami room with 15 half-size tatami mats, which provided living and sleeping areas for the whole family. Slightly elevated with a
flat ceiling, the tatami room can be separated from the living room by five sliding doors (fusuma). Japanese artist Setsu Asakura’s prints on the sliding doors were also executed to Shinohara’s specifications. The visible umbrella structure of the roof covers the interior volume at 4 meters in height, making the small floor area appear larger. The furniture was designed by the architect himself, as well as designer Katsuhiko Shiraishi.

The Umbrella House made a notable contribution to the architectural discourse of 1960s Japan. As it was planned to be demolished to make way for a road construction project at its former location in Tokyo, Vitra decided to acquire the house and save it. Built using a wooden post and beam construction method, the house was carefully dismantled in the summer of 2020 and separated into individual parts. The wooden structure is made of Japanese cypress, Japanese pine and Oregon pine. The reconstruction of the Vitra Campus began in September 2021 in close coordination with the Tokyo Institute of Technology and was completed in the summer of 2022. Today the house is furnished with a mix of replicas and original pieces.