Marvin Bodner, a prime contractor in Lincoln and Boyle counties, has spent most of his 51-year career building new homes and renovating more than 50 historic homes in the area.

He began building homes in Louisville with his brother Rudolph in 1945 after serving in the military during World War II.

Marvin returned to Lincoln County in 1948 to start his business which continued until his death in 1999.

“His business philosophy was to always produce a high quality product at a reasonable cost,” said his son Paul Bodner.

“He was a kind and gentle man who treated everyone with the utmost respect and patience.

“At its peak, customers would wait two or three years for it to do their job. In general, he became good friends with everyone he worked for.

Bodner Construction had three key employees who worked between the ages of 35 and 50: Gene Steinberger and Pat Fitzgerald and Marvin’s brother, Clarence. Each project supervised individually, with Marvin being the ultimate person who personally supervised each project.

Major projects
Marvin built the Greenleaf Mall in Danville, for Jim Stagg of Danville and Ken Morgan of Lexington, and the Suburban Motor Lodge on Maple Avenue in 1962 for Bill Edmiston, EP Woods and EG Guttery.

He also made extensive renovations to historic properties and constructed new dormitories and buildings on the Center College campus, including the Moore-Welsh House built in 1859; House of former students; Overstreet House (Dean’s House) built in 1792; and dormitories on Main Street, and homes for many of the Centre’s teachers and staff. 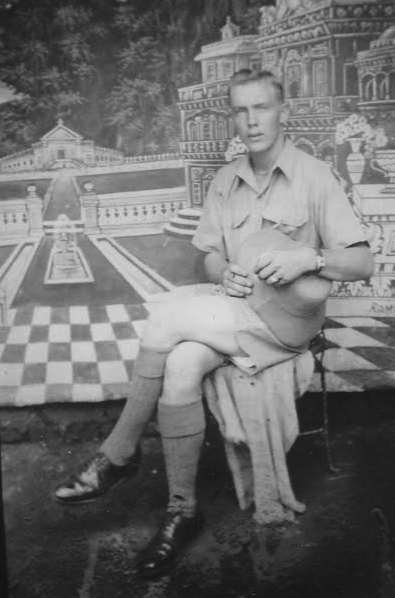 Marvin Bodner in India during WWII

Historic properties
One of the biggest renovation projects took place in the 1960s, Marvin completely remodeled the historic Roselawn mansion and built a farm manager’s house for Charles E. Beck of Garden City, NY, originally from McKinney in Lincoln County.

Roselawn on Harrodsburg Road, was built in 1848 for William Owsley, former Governor of Kentucky. He and his wife lived there 10 years before his wife died in 1858.

Roselawn also has a connection to the Rodes family, one of the oldest families in Danville.

Clifton Rodes was Governor Owsley’s son-in-law. The governor purchased the farmland in 1838 and established his son-in-law’s family on the property until the farm accommodation burned down in 1847. The Rodes family moved to Danville after the fire.

The Happy Valley Farm residence, owned by Mr. and Mrs. Edwin Gamble of Proctor and Gamble, has been renovated and an addition has been added by Bodner Construction.

Marvin also built a new house on the farm for one of Gamble’s daughters. The property is currently owned by Rick Dees, an artist and radio personality.

Major renovations were made to the Ashley House in Garrard County for the Maddox family of Bermuda.

The house dates back to 1840 when the pre-war house was built by a wealthy southern family.

The Todd-McKee-Cheek House, NorthThird Street, dates back to 1836, currently owned by Paul Bodner, underwent a complete renovation in the late 1980s.

John Todd, the first owner of the house, was considered a relative of Mary Todd Lincoln. The McKee and Cheek families resided in the house from 1850 to 1989, when Paul purchased it.

Two houses belonging to the Rodes families have been renovated by Marvin.

The Benjamin Perkins house, built in 1818 and owned by Mary McDowell Rodes, widow of Nelson Davis Rodes Sr., on the corner of Lexington Avenue and North Second Street, has been completely gutted. Marvin did interior and exterior renovations in 1967 and added a screened back porch. The interior was remodeled again after the purchase of Dr. Russ Shearer.

Marvin also made extensive interior renovations on the Montgomery-Rodes House, circa 1837, for Nelson Davis Rodes Jr. and his wife, Martha Butler Rodes. The house is currently the home of John and Julie Rodes and the 5th generation of the Rodes family to live in the two story brick structure.

Glenworth, a historic house on Buster Pike has undergone extensive exterior renovations by Bodner Construction. It was built by Robert Mosely Davis in 1828, on land once owned by the first Robards family.

Mr. and Mrs. Zack Ison owned the house during the renovation.

Marvin was the first generation of the Bodner family in the United States. His father, Mike William, was 8 years old when his parents Thomas and Anna Prunster Bodner came from Sachsenburg, Austria, to America in 1886.

The Bodners settled in the new Austrian community on White Oak Road in Western Boyle County.

Marvin was active for 40 years in the Methodist Church in Moreland where he served as a lay leader, Sunday School teacher and superintendent.

His daughter-in-law, Myrian, would often say, “Marvin’s life was truly an example of the ‘great American dream’.

Marvin Bodner’s family moved from Austria to the United States in 1886 when his father was a boy. His father died in 1928 when Marvin was six, leaving his wife and eight children at home on a small button farm during the Great Depression.

His son Paul said: “From this humble background, through hard work, intelligence and ambition, my father had a very successful life, both personally and professionally. “