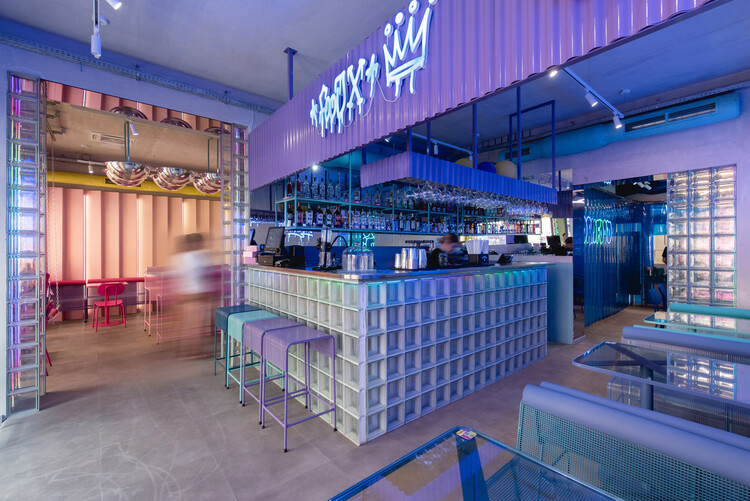 Text description provided by the architects. The combination of good street art and iconic 90s videos is the highlight of the latest project created by fashion designers:lina™. In downtown Poznań, we have created a place where the FoodX team rules with their bold ideas.

We love investors, who come to us with crazy ideas, an open mindset and a fantastic brief – the FoodX team belongs to this category, their food – real Street Art on a plate – says Paweł Garus, co -fashion founder:lina™ studio.

The owners asked us to prepare a project in Poznań using some of the solutions developed in their previous efforts, as well as branding using the fantastic color palette and a large number of neon lights. The inspiration came directly from the menu itself served by the brands that make up the FoodX concept: Mr. Pancake Poznań, PIZZA BOYZ, Ghost Burger and Vegan Pizza Club.

This is how the place was created in a very “street” style and with colors straight from the 1980s and 1990s, directly from the colorful clips of pop-music television, when she played music – says Kinga Kin, the main architect of the project.

The interior is dominated by a gradient of pastel colors running through the walls and furniture. We offered chameleon-like foil on the exterior windows, introducing even more customers to this colorful space, taking them into the crazy world of the 90s

Inspired by the style of those years, we decided to use a glass block, which was very popular at the time. They were used to create a bar and as a finishing element on some walls. Another important atmosphere-creating element is the domed street mirrors placed on the walls and ceiling, which by their multiplication enhance the aesthetic impression.

All furniture in the restaurant was custom-designed and manufactured to perfectly match the atmosphere of the interior – says Jerzy Woźniak, co-founder of the mode:lina™ studio.