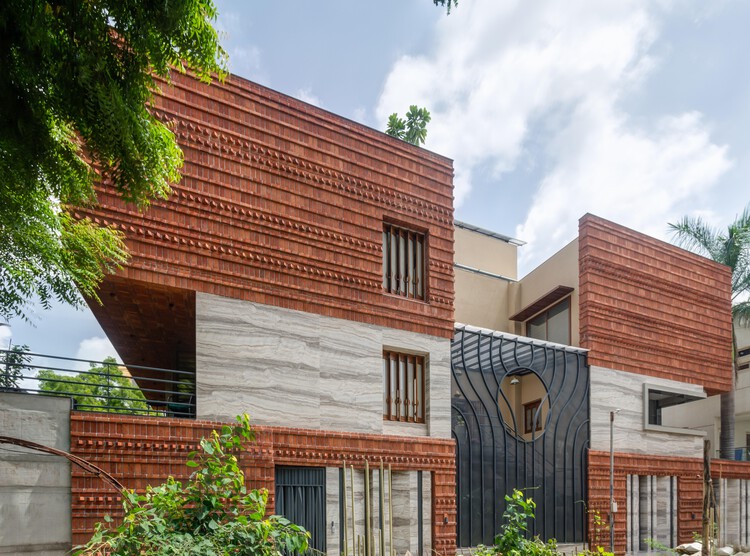 Text description provided by the architects. House of Interaction is a residence for a public figure in the city where three generations of the family coexist. The client’s brief claimed to have such spatial arrangements that they encourage not only horizontal but also vertical interaction; discourage isolation while maintaining privacy. This fundamental need of the client called for a “cutaway game” and the creation of volumes that revolve around the idea of ​​developing this house as a “house of interaction”. The idea is not limited to creating interaction opportunities for three generations, but extends to the creation of interactive interfaces between indoors and outdoors, developing elements that meet the objectives of sustainability, aesthetics, identity and functionality in the purest spirit.

The house on a 4600 Sq.Ft. is strategically divided in two; where two masses of identical bricks are connected by a “connector” block; eventually creating two masses along its length. The connecting block adjoins two courtyard spaces on both sides, and the identical blocks are merged with gardens; thus extending the experience of the interior to the exterior landscape. Located on a busy road in the city, the land has a magnificent view of a large open space. The concern to create a buffer against noise and at the same time to leave the view is decisive in the design of the west facade with inclined fins and deep living areas.

The use of two very distinct materials, brick and travertine stone, reinforces the dichotomy that the house represents. While the house calls for interactive volumes inside, the bricks speak outside. The rhythmic arrangement of the bricks on the south facade aims to lower the interior temperature by mutual shading. The arrangements create a drama of shadow and light on the facades with the sun beating down on them. Brickbats of various sizes were derived to achieve the rhythm on the facade. As the brick south facade faces the sun during the day, the substantial use of the brick pattern achieves a lower temperature inside due to the thermal insulation property of the brick.

The house has a series of in-between spaces giving an innate quality to the design of the house, keeping the interior spaces private and allowing interaction with visitors. The courts, the veranda, the garden and the stilts are all synchronized to achieve the goal and provide the most necessary spaces for relaxation, visual and physical. The clutter-free interior design, climate-sensitive facades and openings allow plenty of natural light to feel fresh.