After several meetings and discussions, the Lincoln County School Board approved new boundaries for board members.

“One of our goals initially was to even out districts with minimal disruption to electoral districts,” Chairman Win Smith said at the April 14 council business meeting.

During several meetings, the council reviewed and discussed various population-based options that were generated by the Bluegrass Area Development District.

The council also wanted to ensure that each district was contiguous. District 3 was not contiguous in the original boundary map.

“It hadn’t been reviewed for 15 years,” said board member Etta Meek. “Bruce Smith brought up two years ago that we needed to review it and we’re just reviewing it now.”

Win Smith said that was because the council had to wait for the latest census data.

“All other data was just estimated,” he said.

Board member Ricky Lane said there was hesitation from other board members and comments about ‘manipulating an election’, despite the fact that he is the one who will lose the greatest number of voters.

“The comment was made about trying to manipulate an election. Of course, I’m running for office this year, as is Win. I just think it’s funny to talk about manipulating an election every time I lose voters that I don’t like losing, to be quite frank,” Lane said. “…if it benefits the candidates running against us, it could also be seen that keeping it as it is until the election could also be seen as an attempt to manipulate the election so that opponents have an unfair advantage, especially if they sway other board members for doing so.

Lane said he wanted the boundaries to touch and be consistent across the board.

“…because the original map was moved for the benefit of a district; to keep a board member there,” he said. “I think it should be placed where it’s right. However, I don’t think my district has to take the biggest hit just to make it fair across the board.

Shane New, director of community planning at Bluegrass AD, said the Lane district is the most densely populated.

“So because of that, obviously you’re going to end up with a smaller jurisdiction in the long run. When we started with this, yours was overtaken by 940 people,” New said. “Every time you start digging in that area of ​​Stanford, your area is going to shrink because it’s the most densely populated area.”

Board member Bruce Smith said his constituents find the timing of the case “strange”.

“They find it very strange that I brought this up two years ago and yes it’s been 15 years so there has been census data that has come out since then. It’s very strange that it wasn’t important two years ago when I brought this up when I came to the board, and right here before an election here in two months it was put on the table. agenda,” Smith said. “I heard that other reasons could be the cause in 2007.”

Smith said elementary schools weren’t identified on the options as requested. He said some council members might not care if there’s a school in their district, but he does.

“I didn’t sit here a few weeks ago choosing where I wanted to be because I stand by my principles,” he said.

Smith said none of the four options met the criteria.

“There are at least two in each option that are either below or above,” he said. “Thus, none of the four options meet the 10% criteria.”

He’s also concerned that candidates are filing before the June deadline, Smith said.

“If we change anything, they might be waiting to file here this week in May… if we change anything, it might stop them running,” he said. “As I said at a previous board meeting, we didn’t want to be seen as interfering with an election when the board had a vacancy not too long ago and in my opinion , it’s essentially the same thing.”

Smith said that could be done after the election is over.

“I find it very strange that this has been known for 15 years and it was not important two years, now we have to deal with this immediately,” he said. “Some of my constituents have also told me that they keep hearing this ‘smell test’, they think it really stinks.”

Superintendent Michael Rowe said he took offense to the comment.

“I’m offended by this Bruce, really,” Rowe said. “…when you made the comment that you didn’t want to use Bluegrass ADD because you were talking about taxpayers money, I didn’t believe it. You had no problem being part of the recovery of l McKinney School, to start this and take this district to court that cost us $10,000 It didn’t pass a smell test for me and it still doesn’t pass a smell test.

Smith said Rowe turned him into the attorney general and the office decided he had the right to ask questions.

“I did it on the basis of a lawyer,” Rowe said.

President Smith said the group was drifting off topic.

“Of the ones we did, it was as close as we got to that threshold,” New said. “The threshold, my understanding, and I’m not a lawyer, it’s a goal that’s being tested to prove that it would work. So the question would be “have you made an effort to find your way there and also adhere to the restrictions of trying to stay as close to existing neighborhoods as possible?…”

Lane asked Bruce Smith if the board had waited until 2023, would they be interested in option 3.

“As I said earlier, I will stand behind my principles. I would like to do what others did here a few weeks ago, choose too. But I’m not going to because I support my principle that it’s frowned upon in the community,” Smith said.

None of the four options meet the criteria, Smith said.

“It may be in December. It may be in November after the election,” he said. Smith said he was not in favor of any of the options.

New said how exactly to meet the criteria would mean dividing other precincts and that could cause problems for the Lincoln County Clerk’s Office. 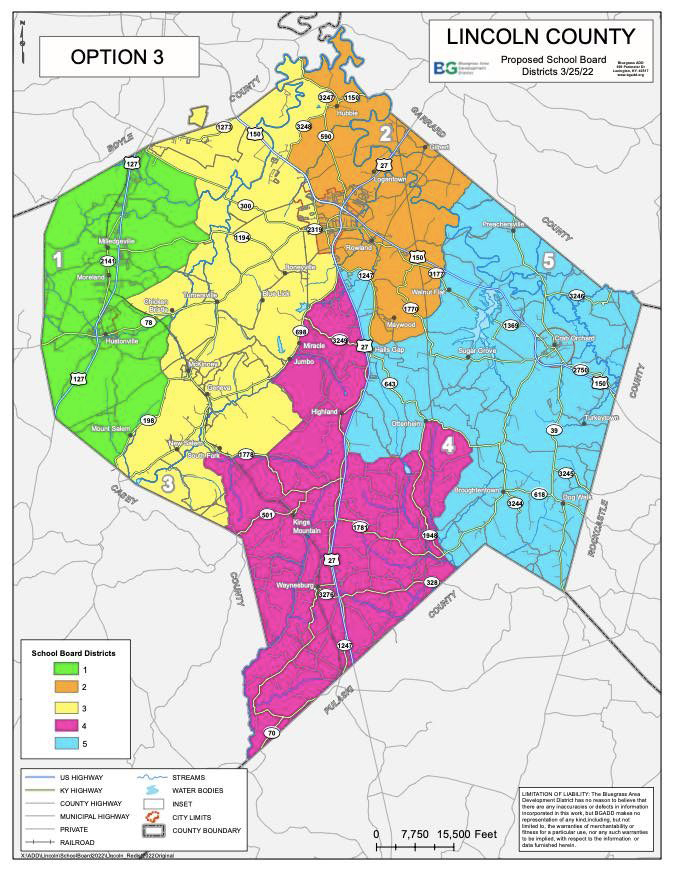 Of the four options, Option 3 comes closest to the 10% threshold and divides the fewest speakers, New said.

Lane asked if the 10% threshold was a requirement or a guideline.

Council solicitor Jonathan Baker said it was not a ‘hard and fast’ rule.

“Your goal is to get as close to 10% as possible, as Mr. New said, without there being a fraudulent reason why it’s not,” Baker said.

New said Bluegrass ADD had no political agenda or knowledge of candidate filings.

“I don’t know where the people who might think of running live…” New said.

Meek said if the public perceives the discussion as political, why not wait until after the election.

“I think it would be best to do it in December,” Lane said. “I agree that for county fairness, that’s probably what we need to do. I am also in favor of not doing it before the election simply because it gives people in the community fairness at all levels. The agenda is absolutely not to manipulate an election, but to make it fair for other council members who might decide to run.

Sneed amended the motion with an effective date of December 1, 2022.

The board voted 3 to 2, with Meek and Bruce Smith voting against the motion.