This upside-down wellness center, designed by the architecture network noa*, challenges common wellness centers with the new form it offers by defying the law of gravity in South Tyrol, in Italy.

Named the Hub of Huts, the 460 square meter building was designed as an extension of the Hubertus Hotel in South Tyrol, known for its iconic cantilevered swimming pool, designed by the same studio in 2016.

Through its new suspended platform, it defies the law of gravity by turning the concept of this wellness center upside down. In 2019, the studio was given a new mission to create a wellness extension to the hotel. 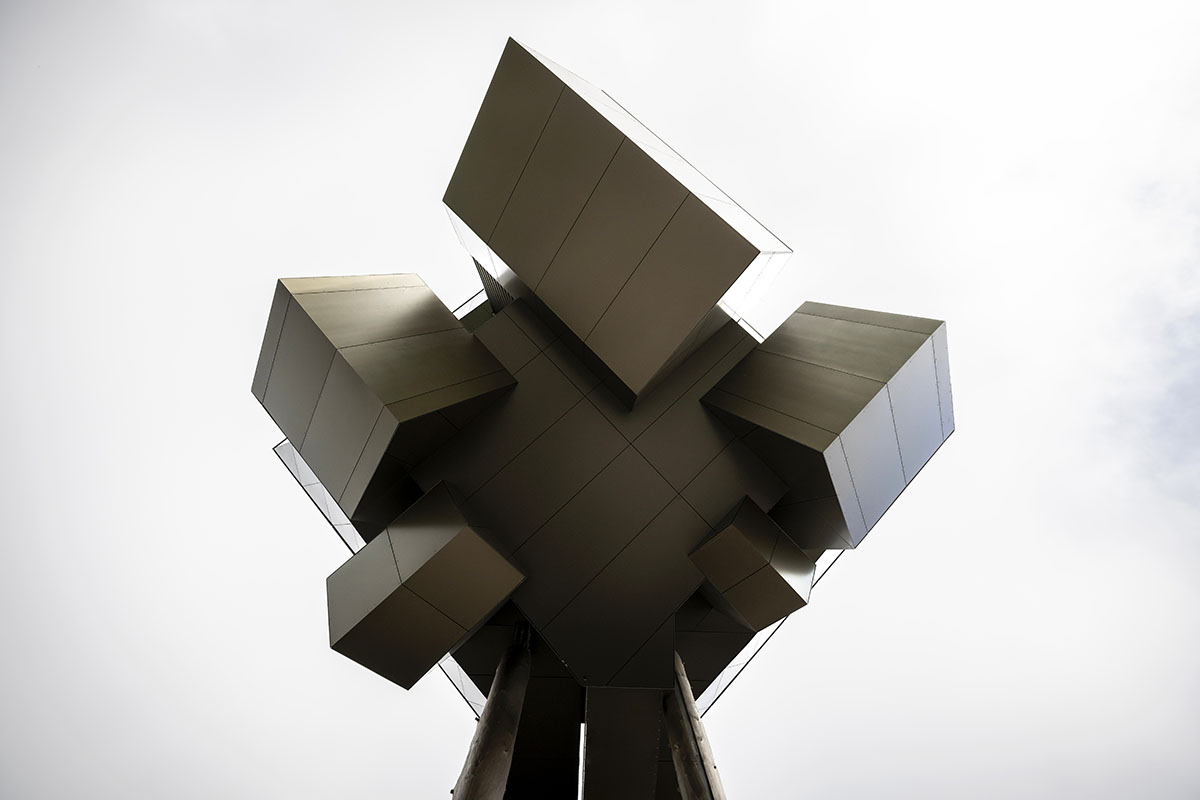 According to noa*, “it was not an easy task for a building that had already found its symbol in the swimming pool, but it served as an inspiration for the new project”.

Hub of Huts, located on the southeast side of the hotel, is situated in a symmetrical position to the pool. 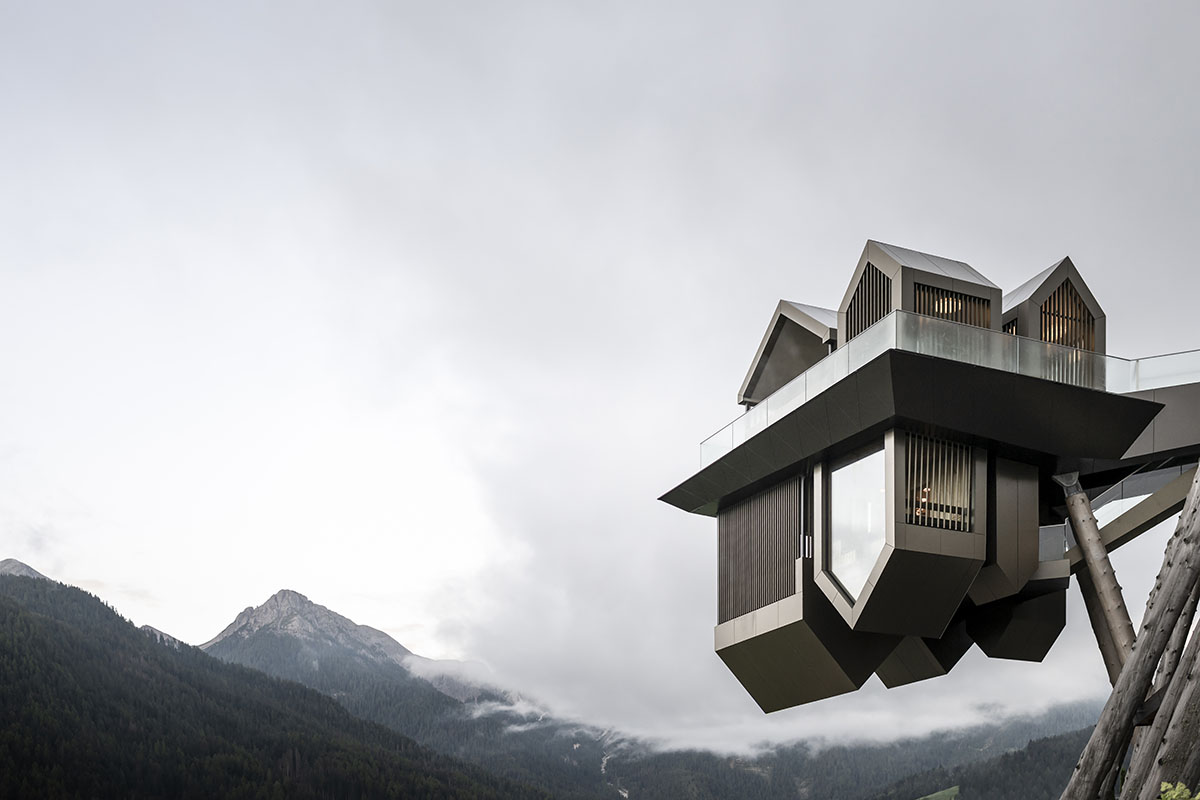 The wellness center is made up of small-scale volumes with sloping roofs and half of the volumes are built on the skyline, while the other four volumes are upside down under the platform on which they find themselves.

Detached from the main building, the structure is supported by a platform that hovers 15 meters above the ground and is supported by two pillars clad in larch logs, similar to those that punctuate the rear facade. 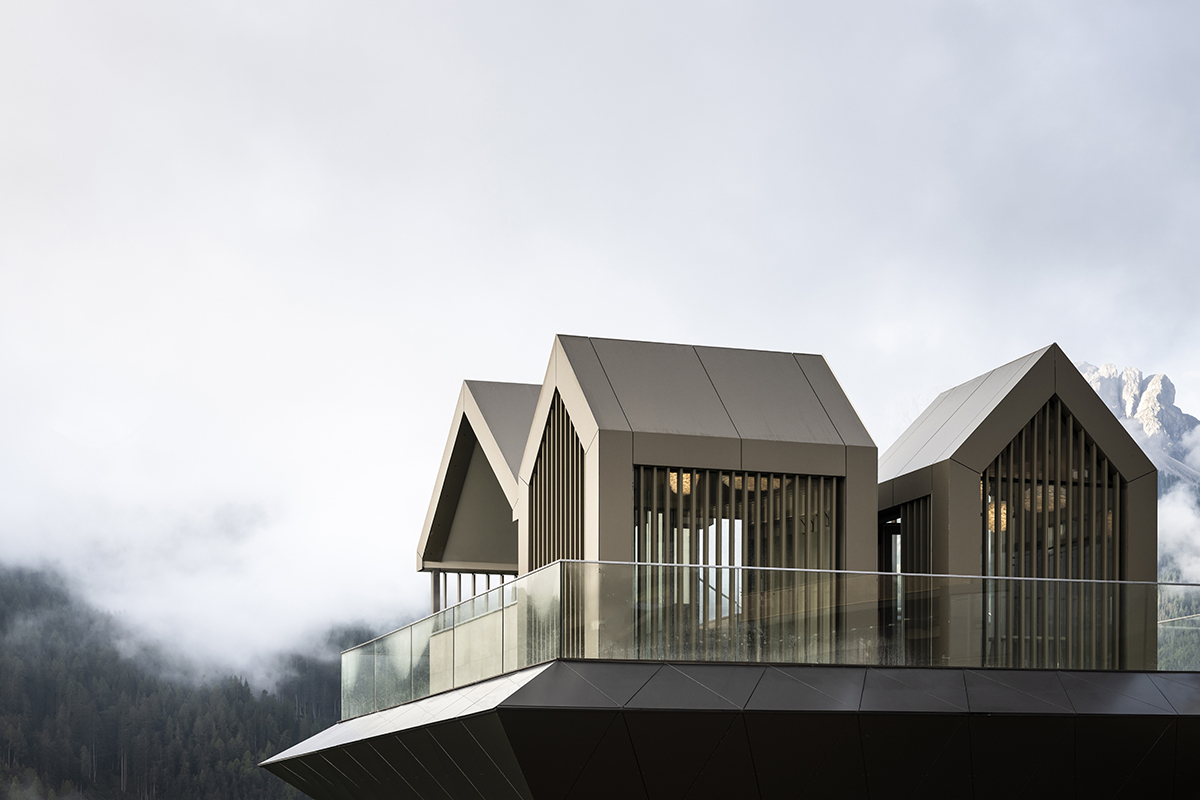 In a first phase of research, the noa* team examined the new starting situation and captured the atmosphere of the house in its context.

The reflections of the surrounding landscape on the pool referenced the design concept, as noa* explained in their project brief.

The architects wanted “to materialize what we see reflected on the surface of the water, as if the image were a transient rendering ready to be converted into reality”. As the team stated, “it’s a concept that plays with the horizon line, the perception of the upside and the viewpoints”.

“The essence of this project is the reversal of horizons, with the resulting effect of wonder for the observer”, declared Lukas Runger, the architect in charge of the project and founder of noa*.

“However, if you think about it, changing perspective is a common exercise in wellness spaces, where, depending on whether you are lying in the sauna, sitting in the relaxation area, or plunging headfirst into the pool, the views are constantly changing,” Runger added. 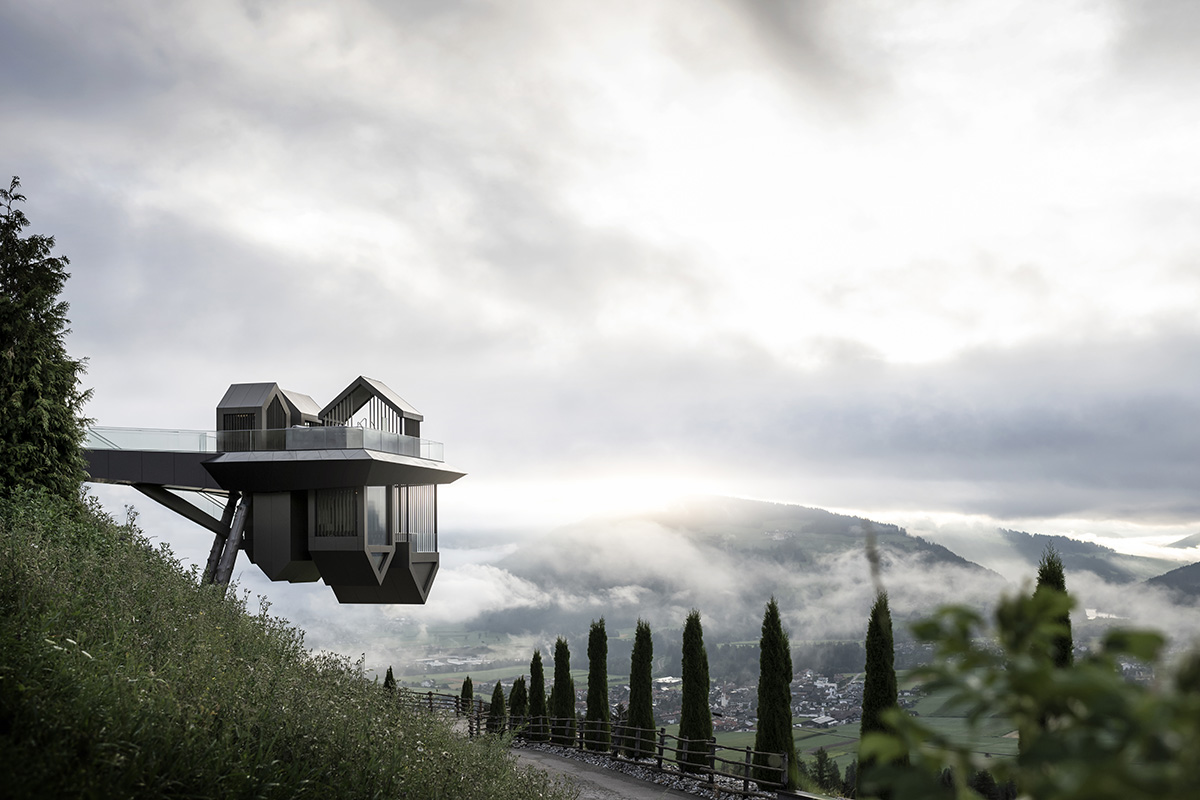 Visitors access the wellness center via a suspended walkway, which at the same time opens onto the newly built relaxation area, which can accommodate up to 27 people. 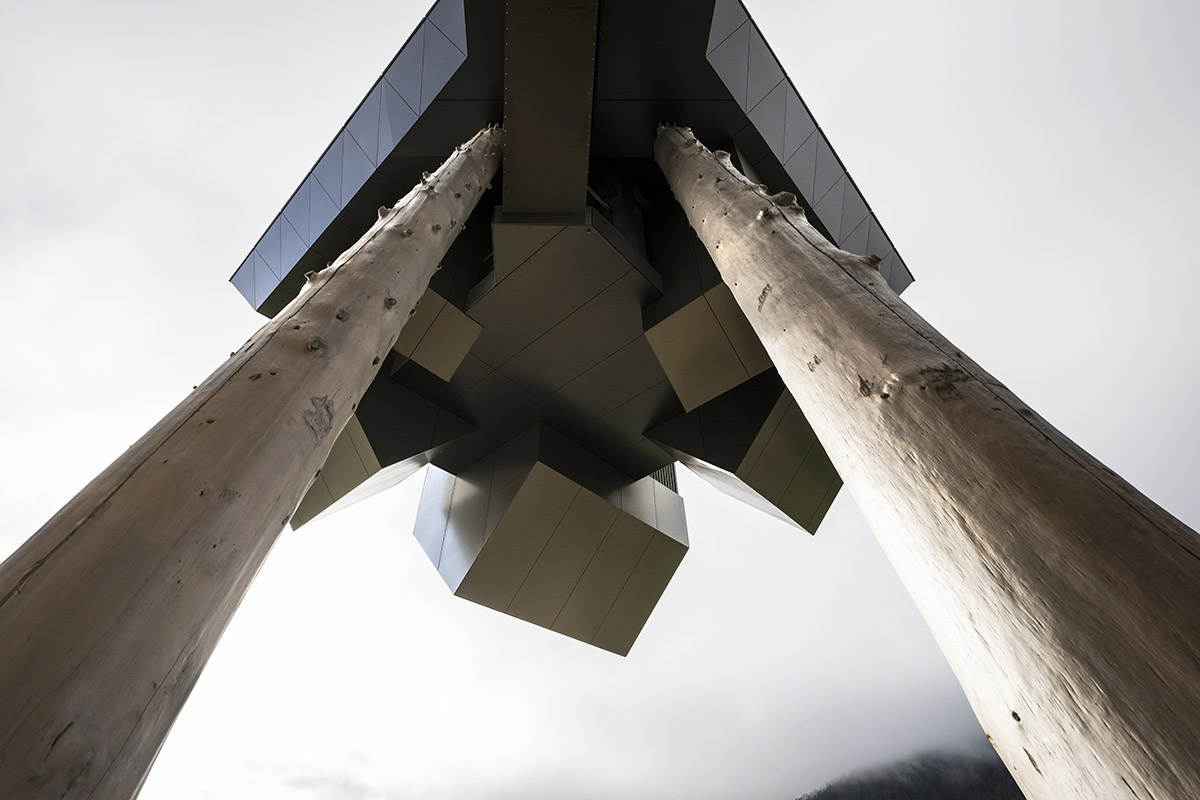 On the platform, the team places individual microstructures with gabled roofs to accommodate the functional program on two levels. On the lower level, guests encounter a surprising element since the horizon undergoes a 180° rotation, and the cabins seem to be anchored upside down.

noa* features two levels offering different degrees of privacy – exposed spaces are placed above and protected spaces are located below the platform. 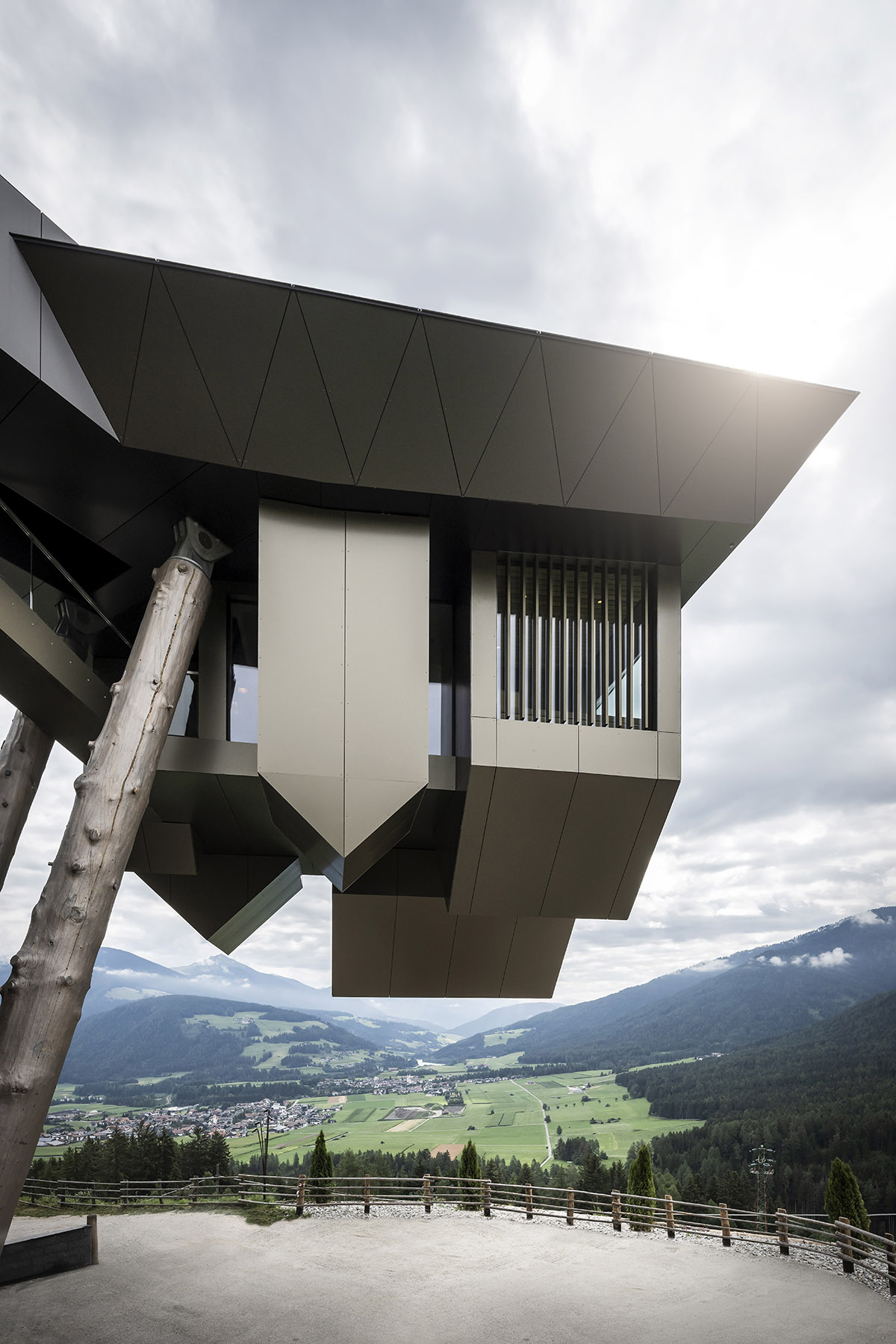 On the upper floor are two whirlpool baths, two panoramic showers and a changing room. The lower floor is a space without textiles: the closed central part houses the hearth.

From here you can access the soft sauna, the Finnish sauna, a shower cabin, an ice mist shower and a third outdoor swimming pool, from where the gaze can sweep over the surrounding landscape. 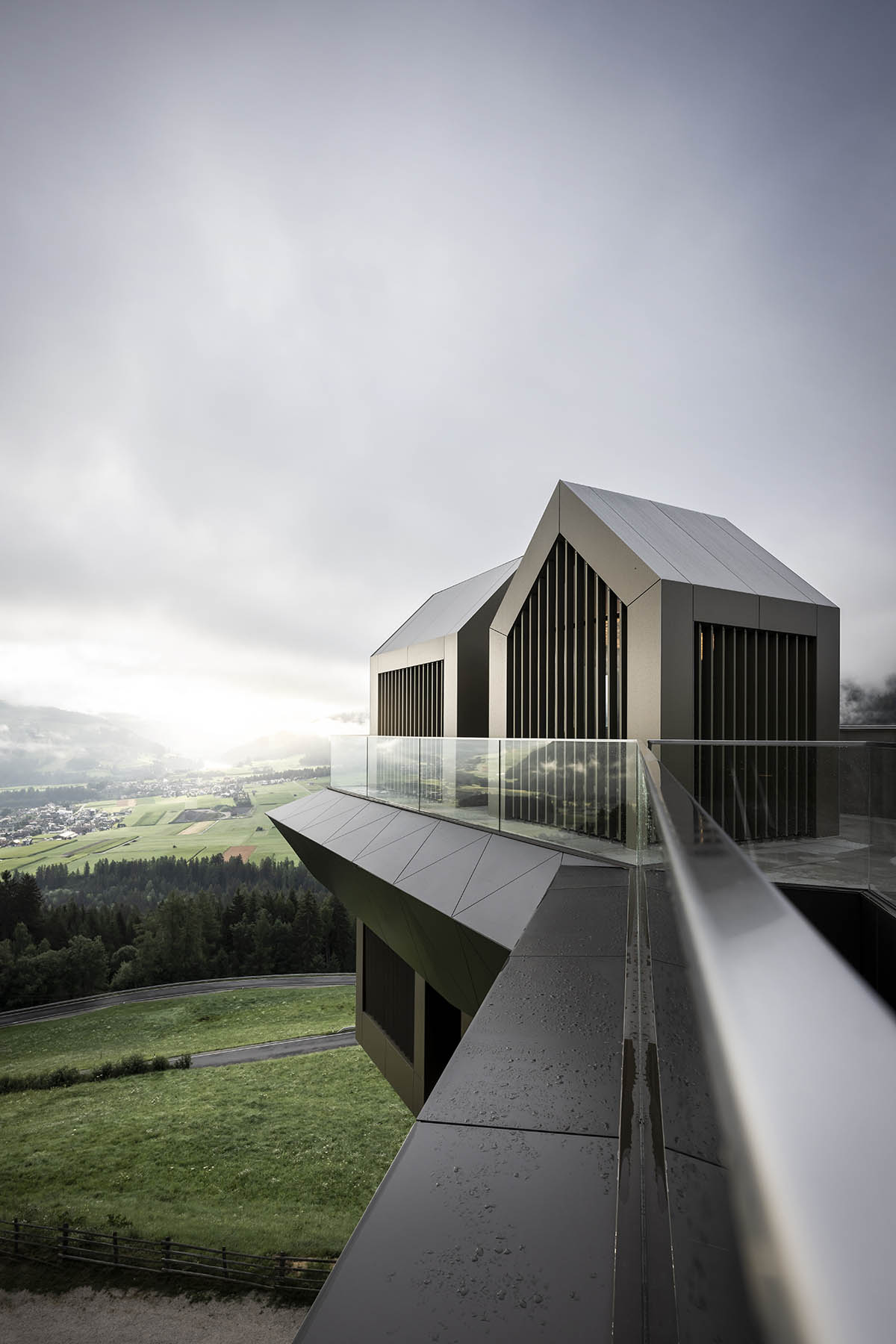 “The lower level of the platform causes a feeling of remoteness in the observer. As one descends, the temperature increases and the environment becomes more protected. It looks like a descent towards the center of the earth, with the poles reversing,” said Gottfried Gruber, who oversaw the project.

The studio also explained that there were two reasons for working with reverse-pitch roofs, which were driven by formal and functional reasons. 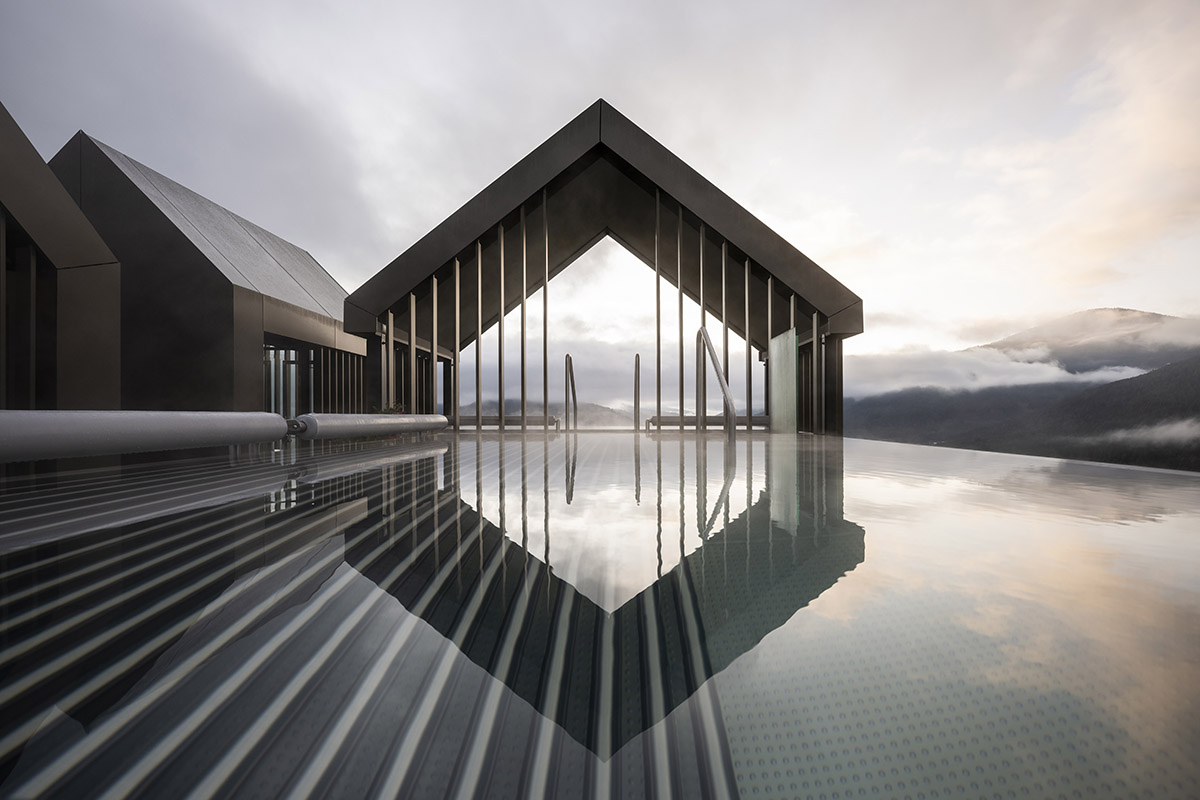 “On the one hand, the desire to reproduce the architecture of a mountain village”, specifies the office.

In addition, the offset of the cabins and the alternating orientation of the roof ridges allow a 360° view of the landscape, a real centerpiece of the project. 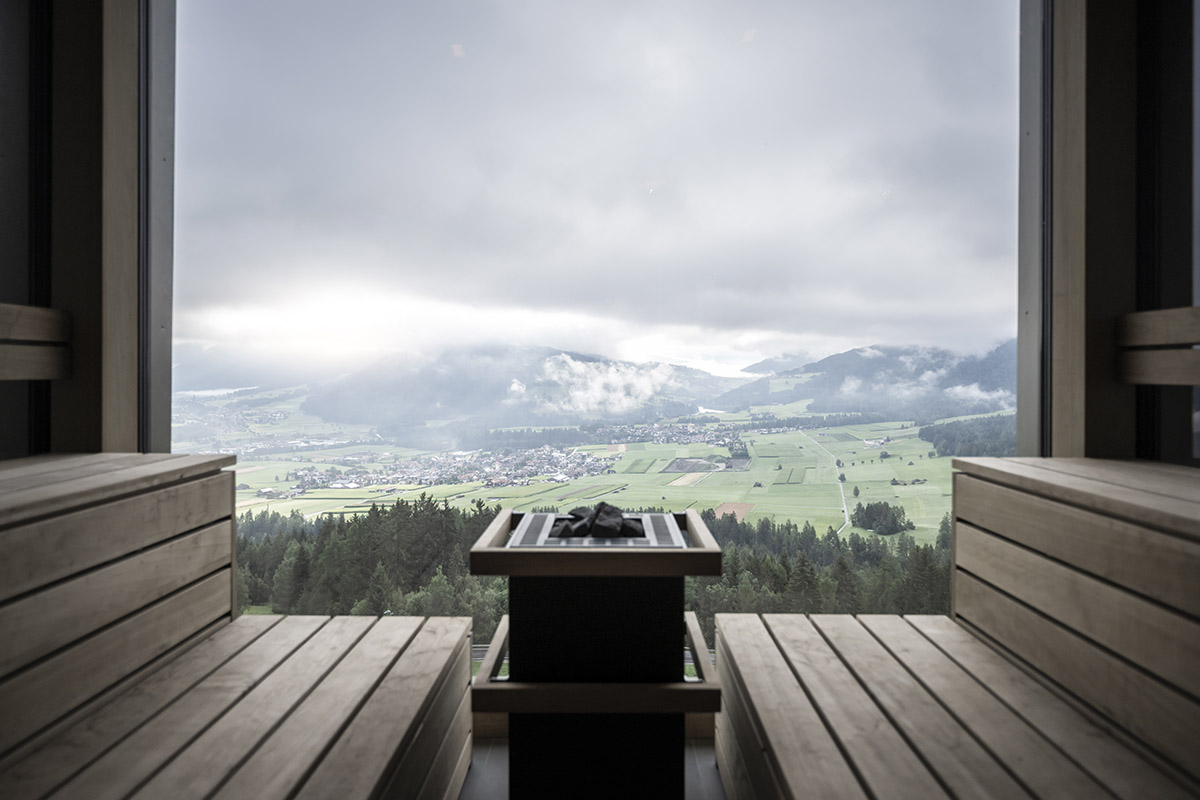 The materials and colors chosen in the project are in harmony with the mountain landscape. For example, aluminum panels in natural brown tones dress the cabins, as well as the thickness of the slab, which is formed by a structure of steel load-bearing beams.

The brise-soleil system that hides the windows is also of the same material and the same color. The floors are in light beige ceramic, while the floor is in white oiled oak in the relaxation room. 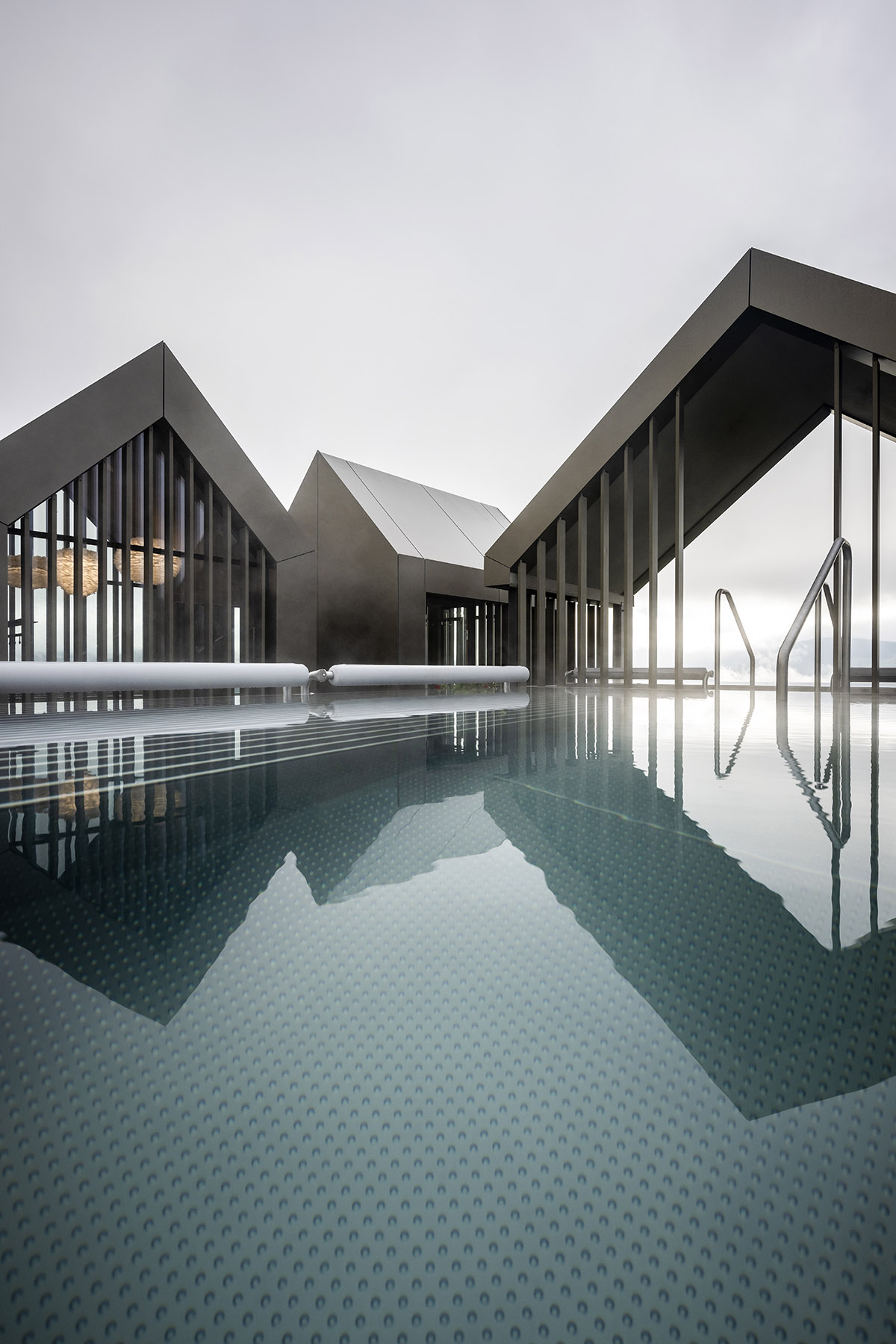 According to the studio, with this new mission, the team was able to rekindle the imaginative momentum from which Hubertus was born, designing a platform that, with its 20-meter cantilever, marks a new floating outpost. between heaven and earth.

“A project where the force of gravity seems to vanish to make way for unexpected scenarios,” the bureau concluded. 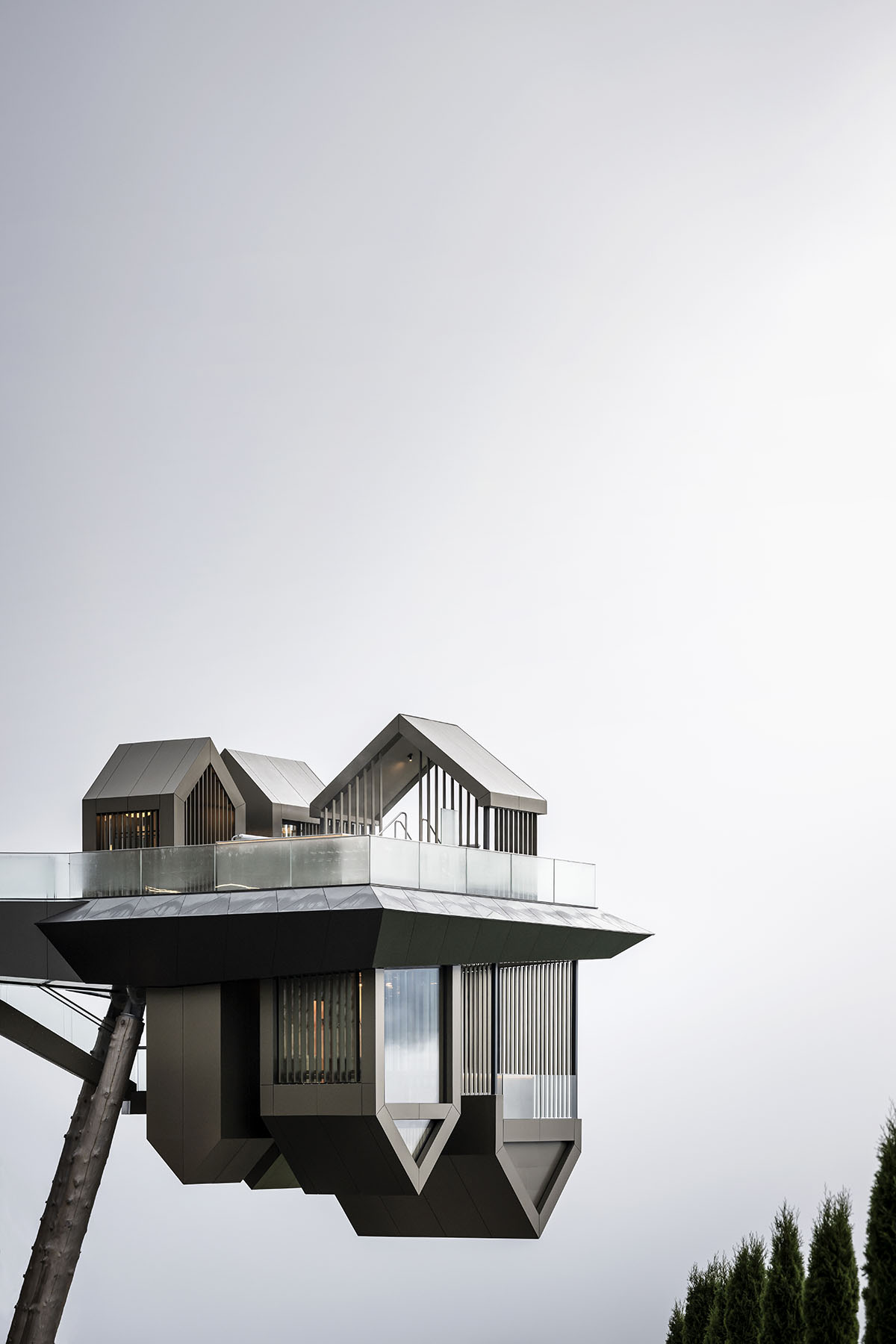 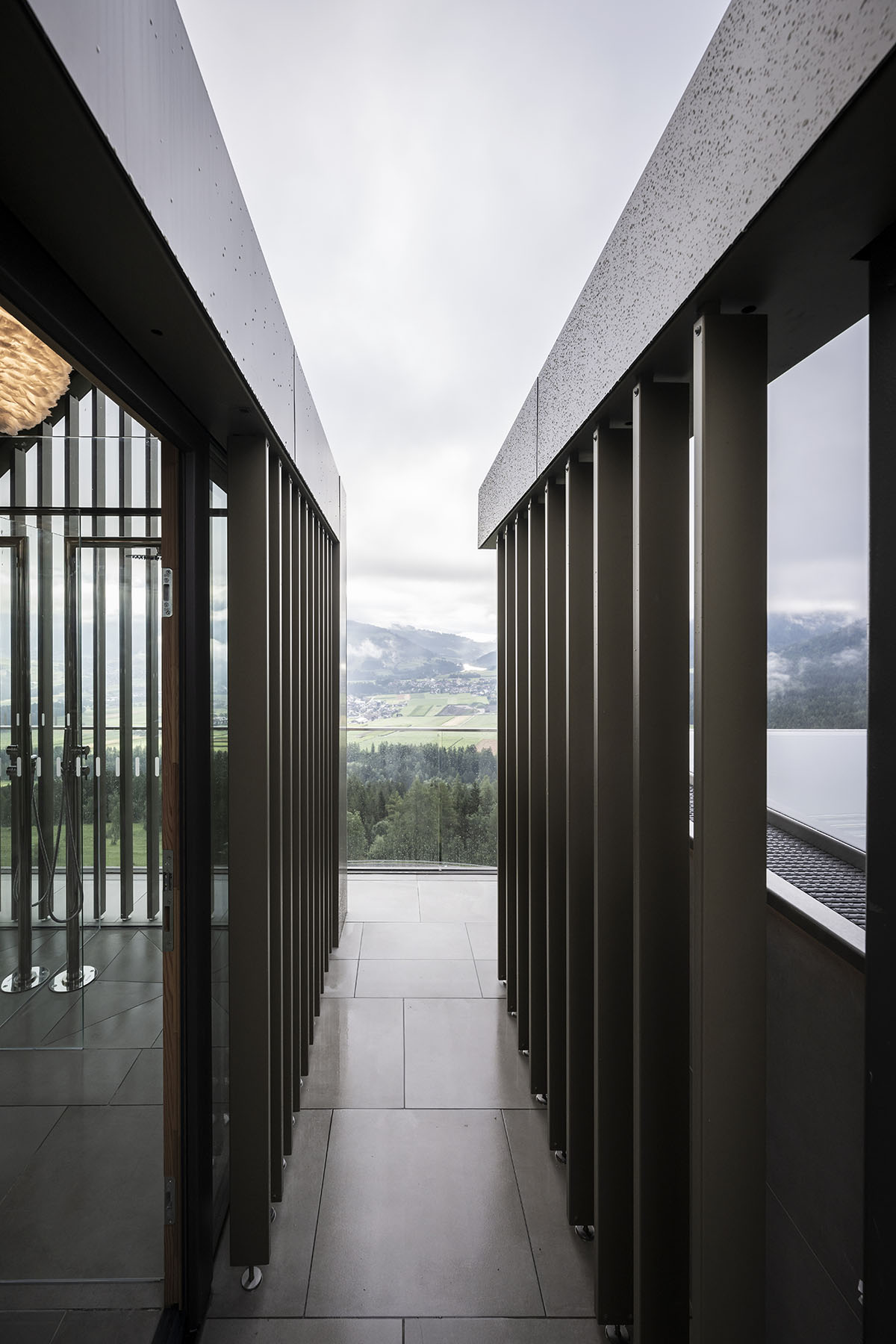 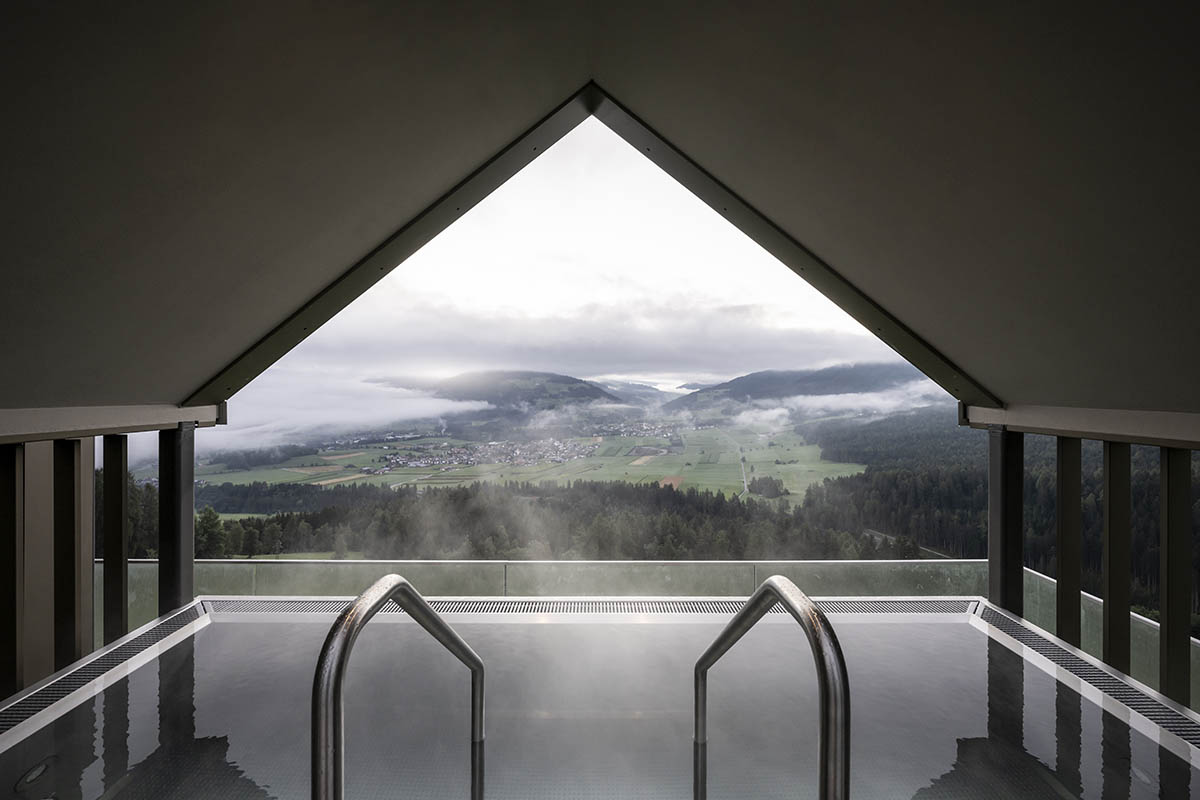 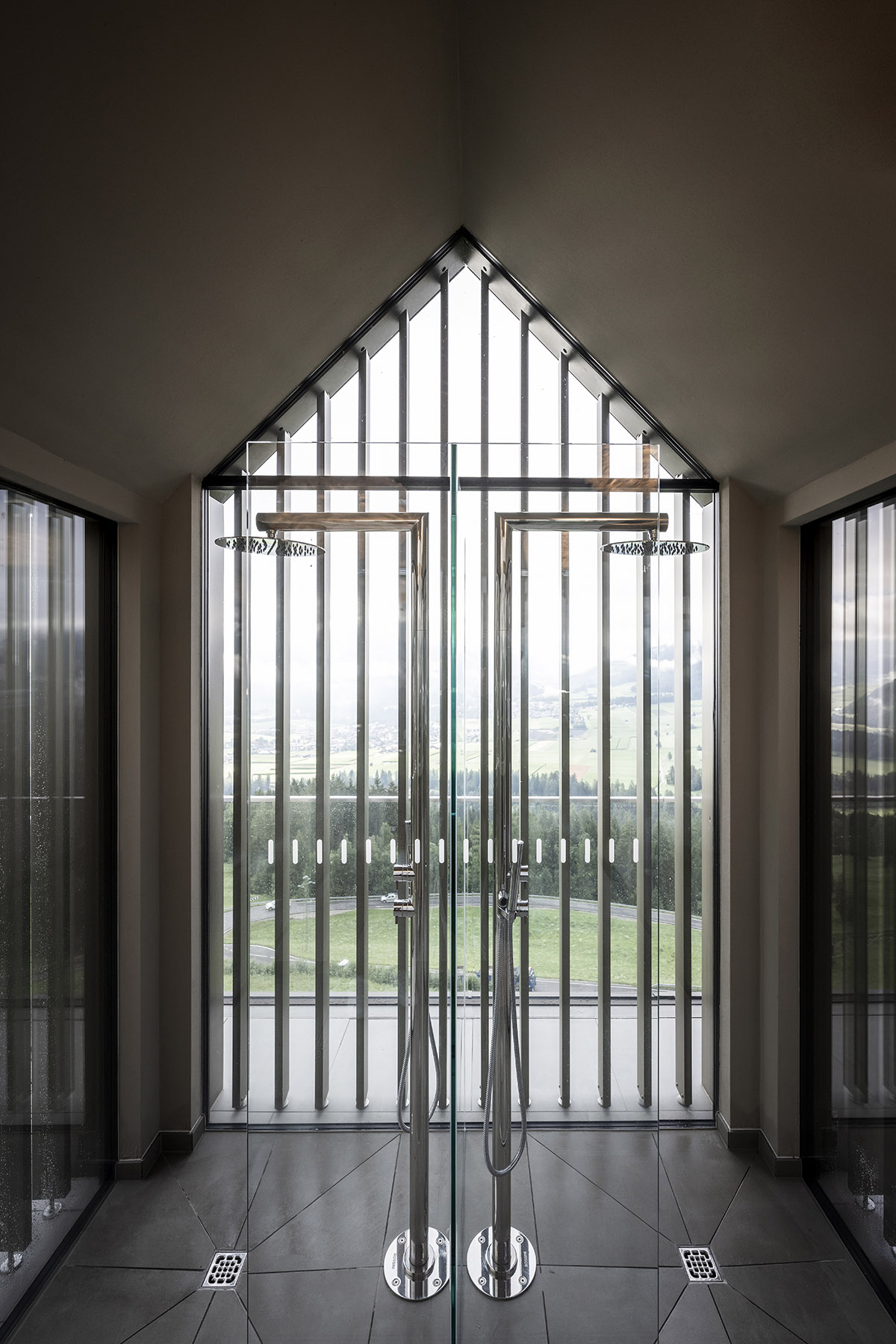 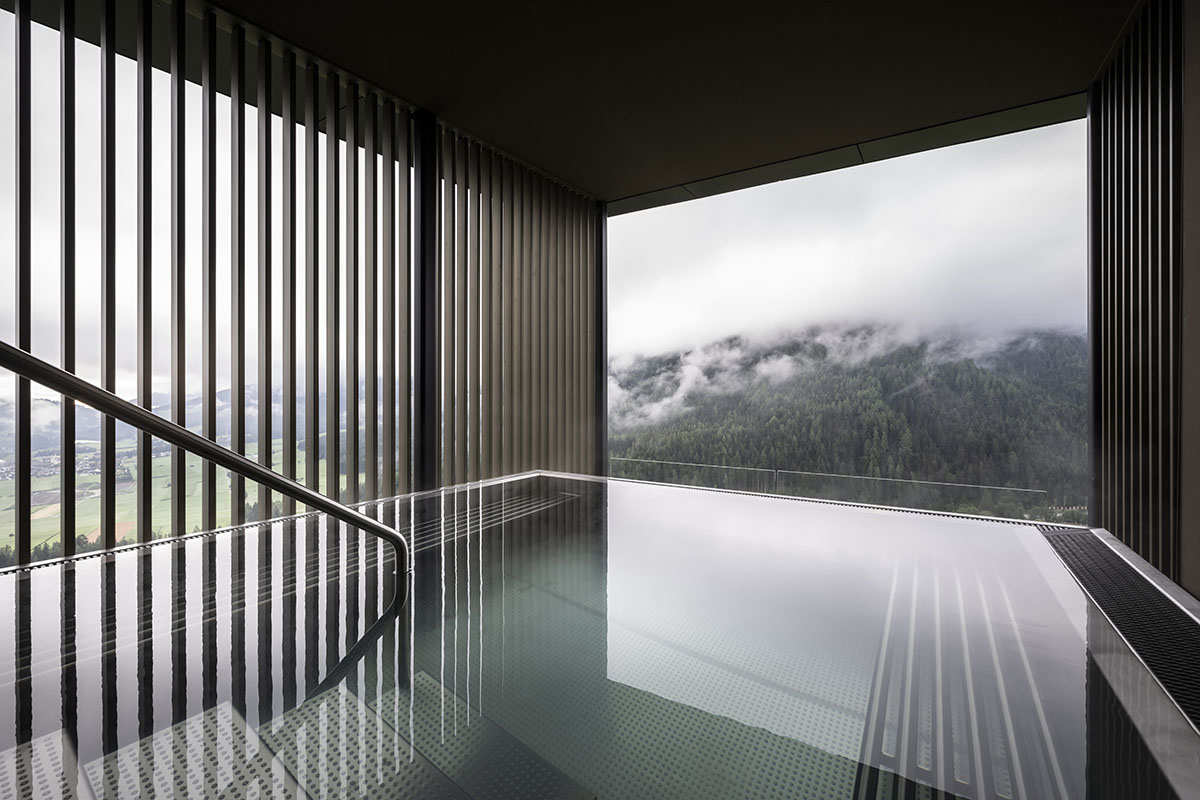 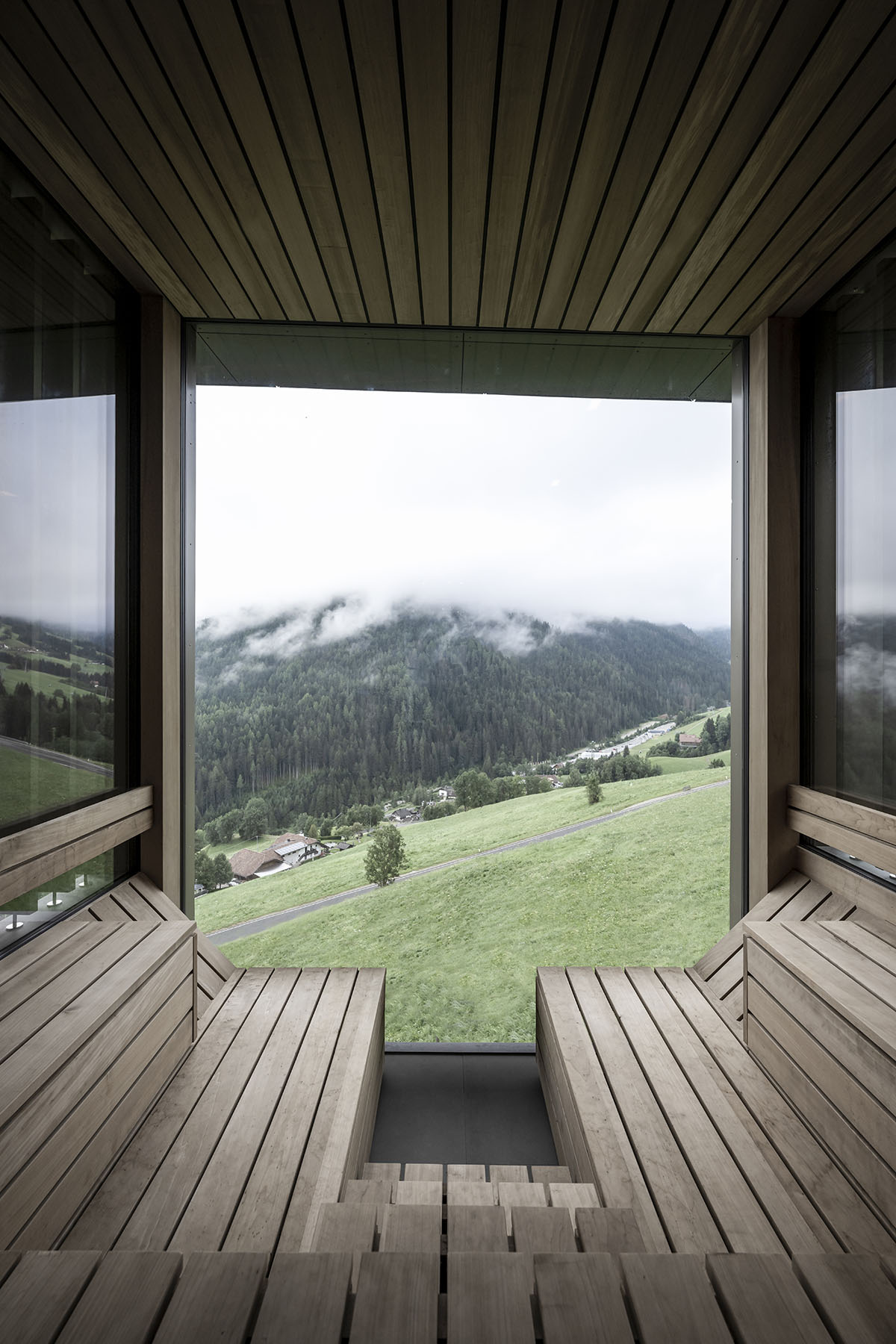 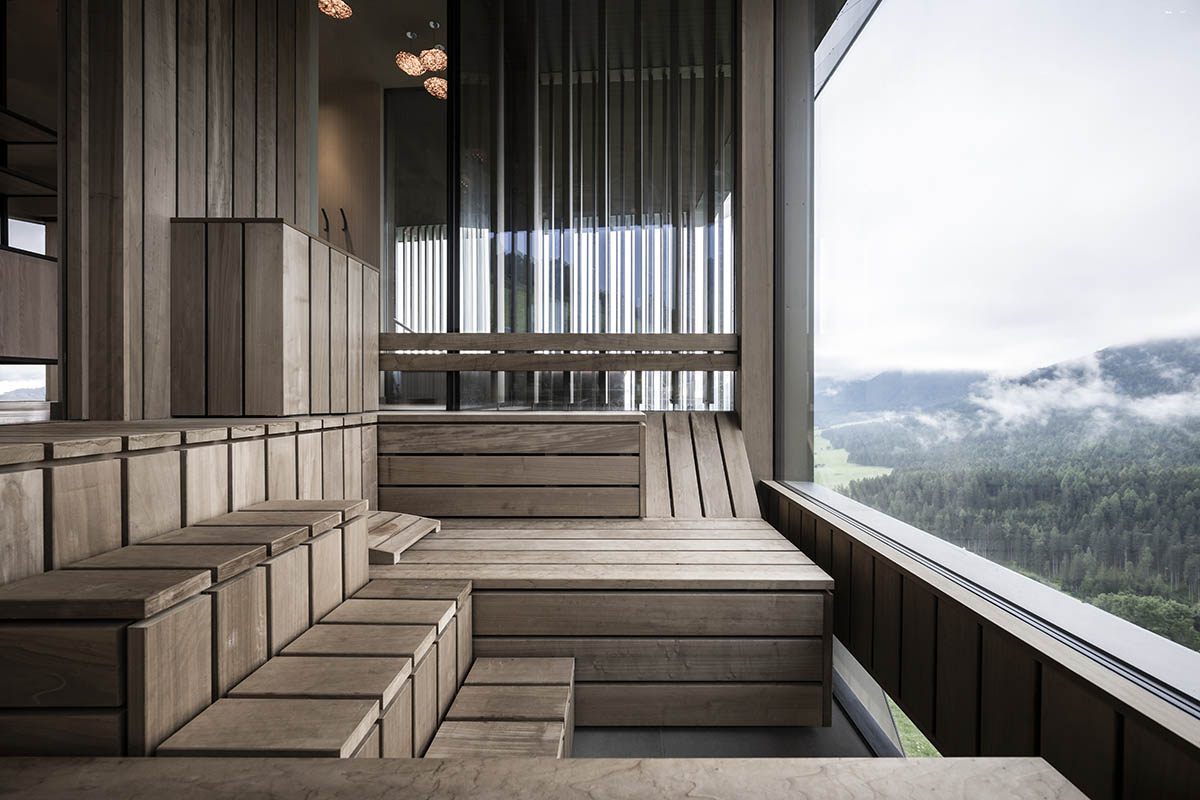 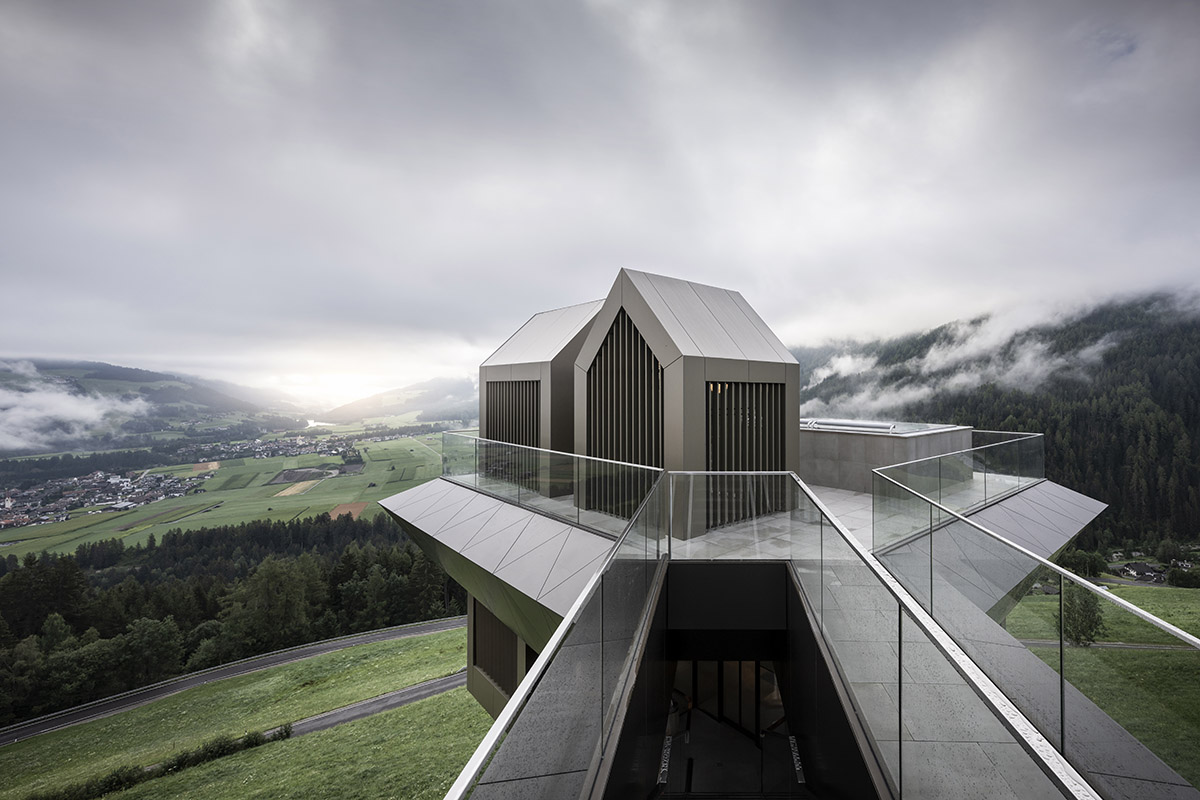 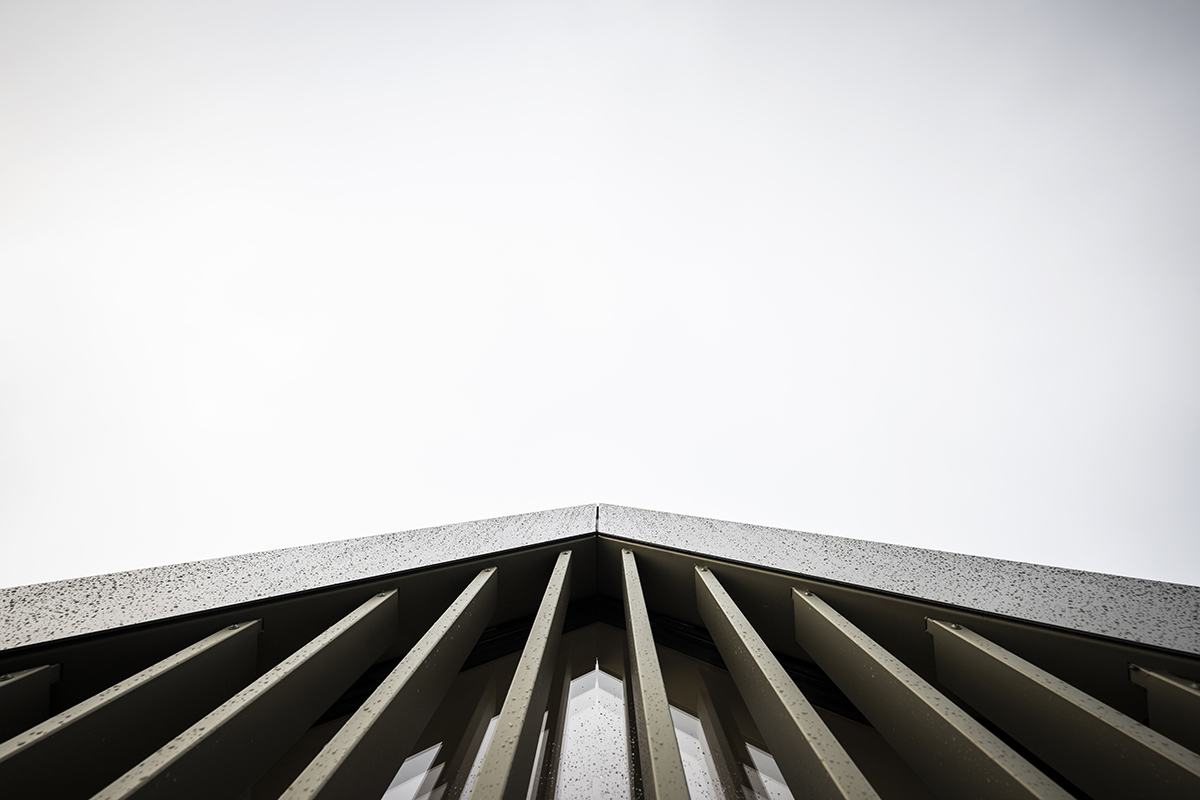 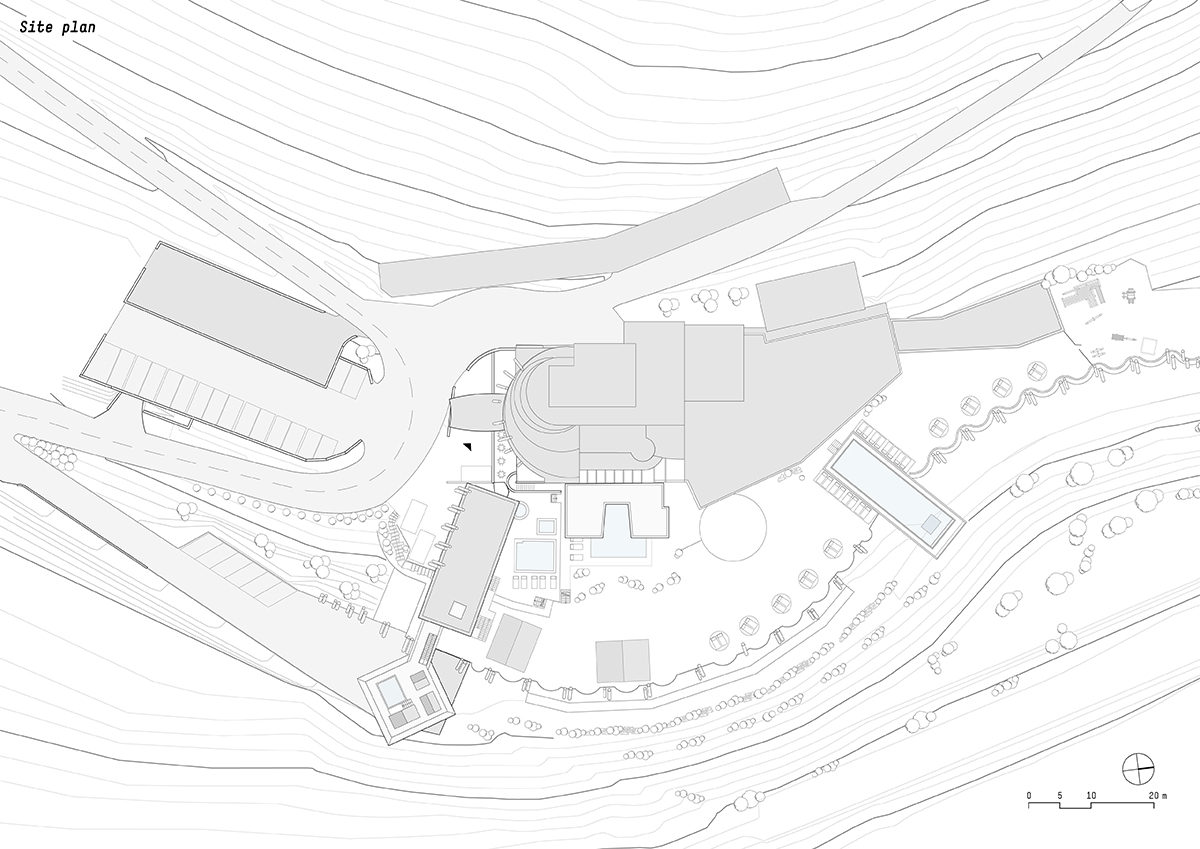 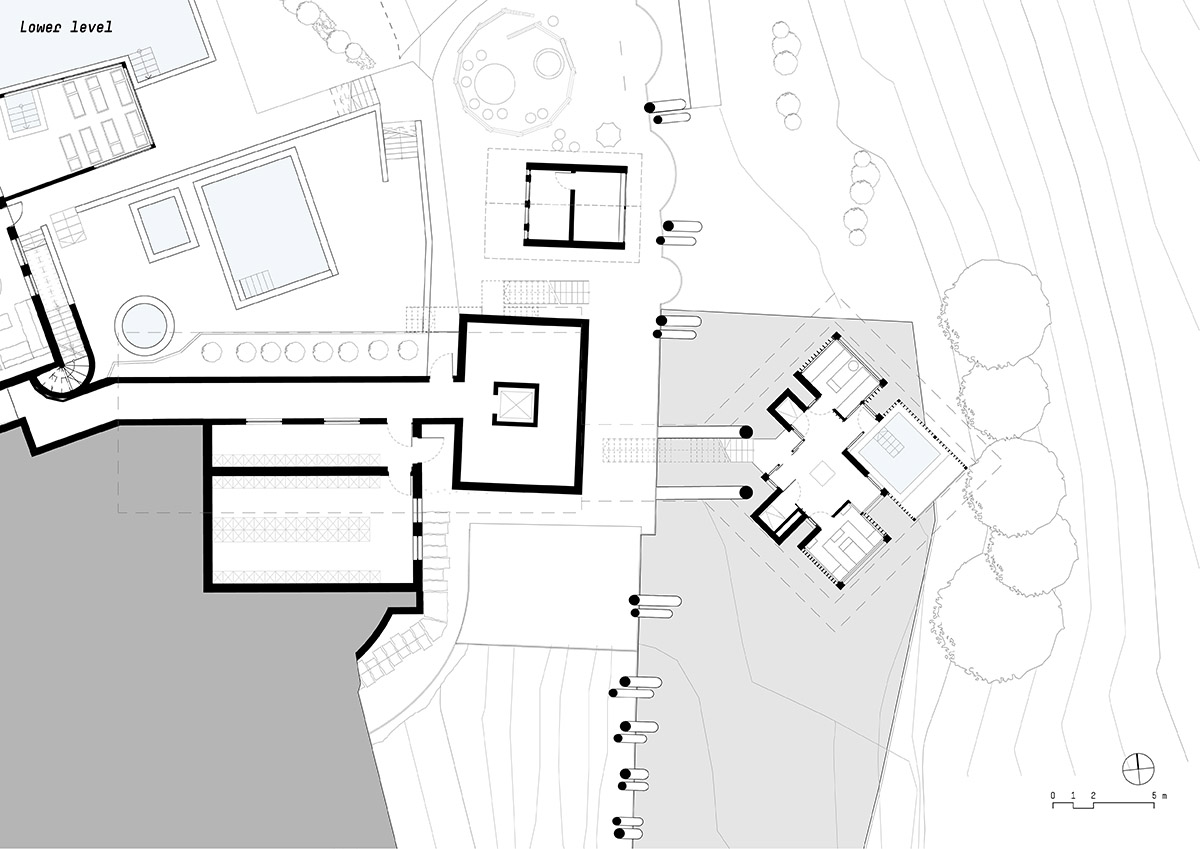 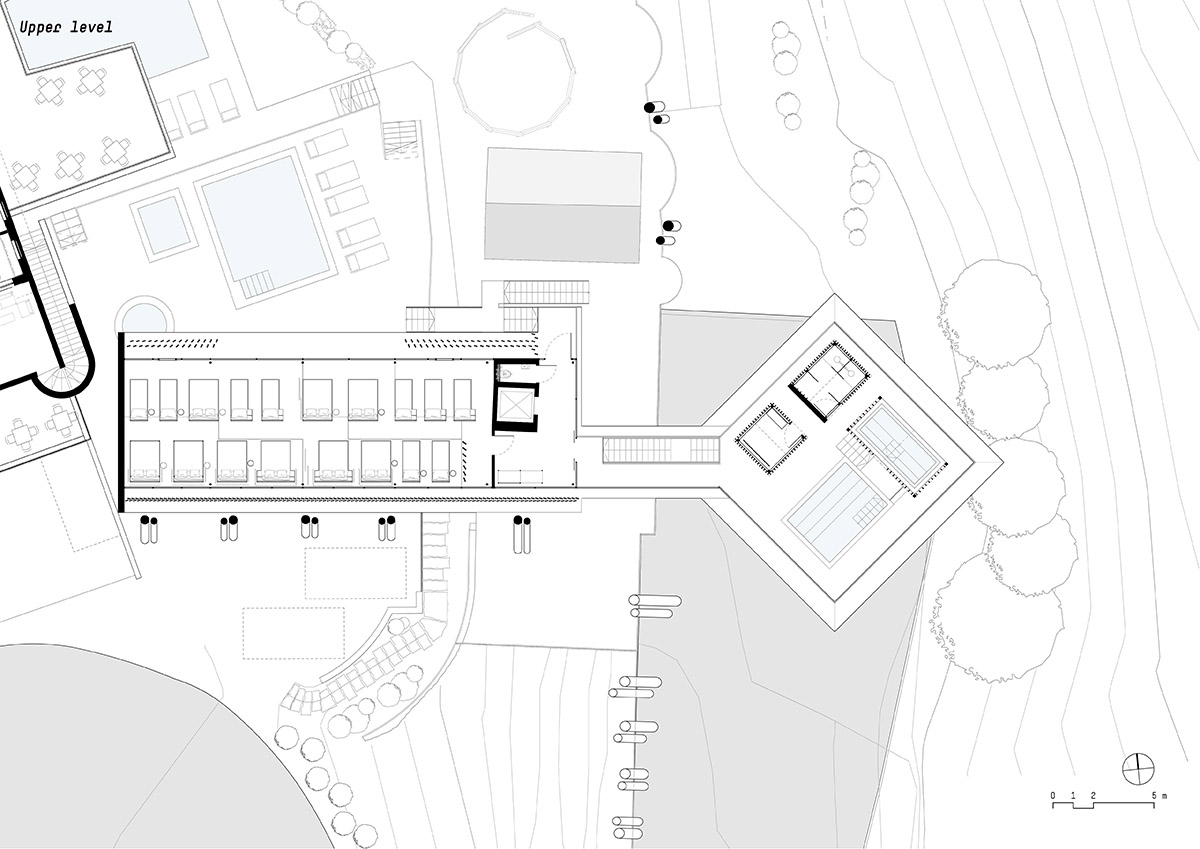 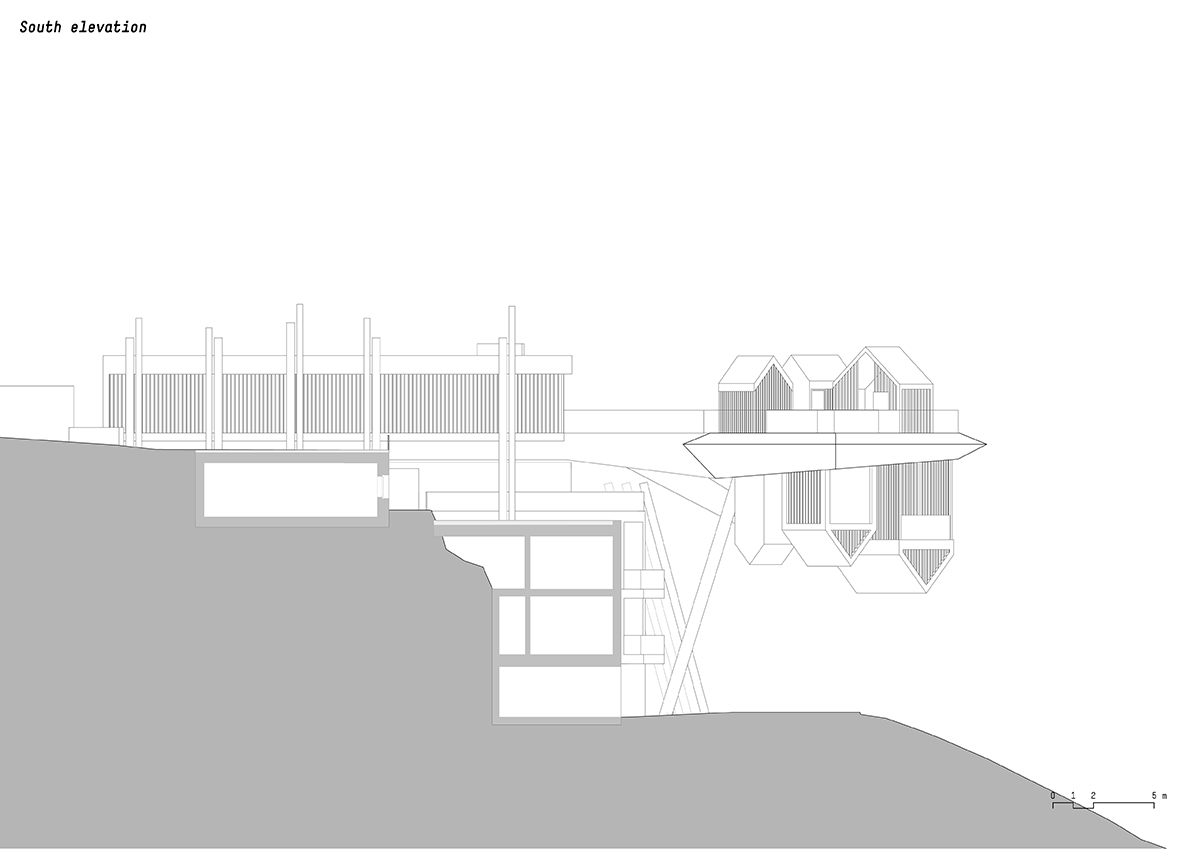 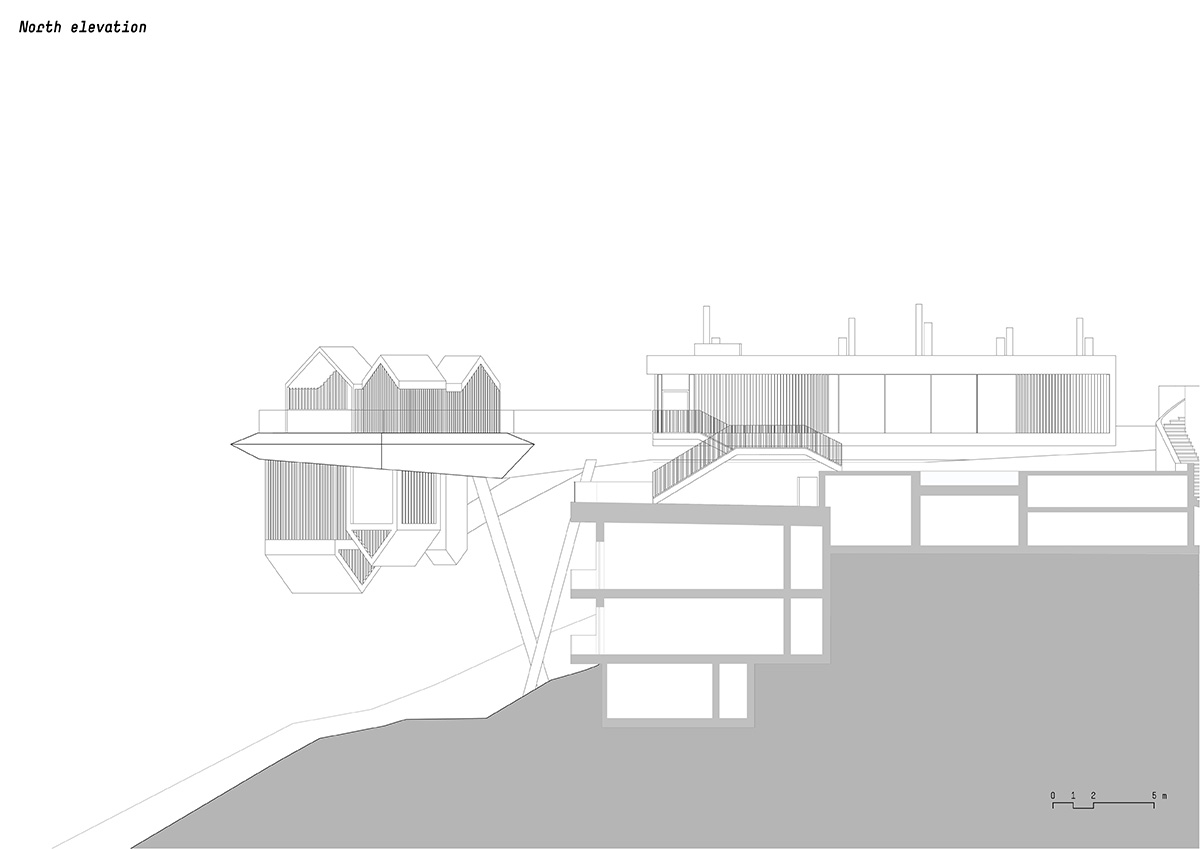 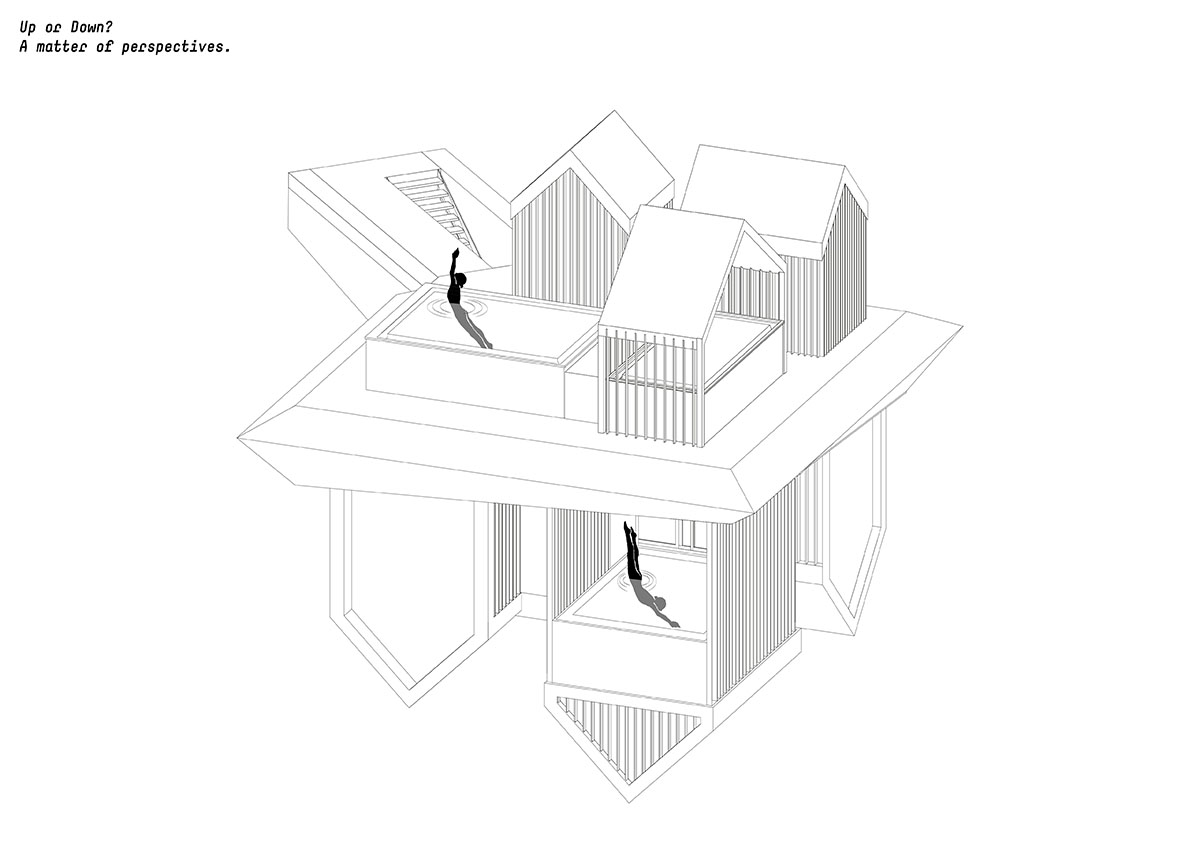 noa* has also transformed a 19th century house-workshop into a bohemian-style bistro with deep alcoves in Bolzano, Italy. The studio has designed Floris, a new hotel of self-contained treetop suites elevated on 3-meter-high stilts in South Tyrol, Italy.

noa* is led by founders Lukas Rungger and Stefan Rier and based in Bolzano, Italy and Berlin, Germany.

Name of the project: hut center