The project is named after the street on which it was built, Monte Tauro, in the upscale neighborhood of Lomas de Chapultepec.

The area is an established residential enclave that lies west of the Bosque de Chapultepec, one of the city’s main parks.

Pérez Palacios Arquitectos Asociados (PPAA) chose materials to highlight the programs located in each part. The studio constructed the exterior walls of the bedrooms and private spaces using colored concrete formed from planks.

However, the primary common space has a wooden frame that contrasts with the concrete of the overall envelope.

The wooden spaces are in the middle of the house and enveloped by the concrete ones.

“The program has been separated and arranged according to three circulation axes on the ground floor, dividing the public axis, the service axis and a block of rooms”, explained the architectural firm.

“This architectural approach seeks to separate these three blocks into proportionate volume and section, to emphasize that each block serves a different purpose for the project,” the studio added.

The main entrance to the house from street level leads guests into a hall at the intersection of the legs of the L-shaped floor plan.

To the side of the house is a secondary terrace, with steps leading down to the lower level and the garage.

The site has neighbors on three sides and a street on another, so the architecture studio chose to create this small courtyard with a skylight to illuminate the basement.

In total, the 645 square meter house has four bedrooms, including a bedroom for the servants employed by the owners.

The ground floor includes a kitchen-dining room, a media room, a living room and a bedroom in the private areas of the house.

A small staircase leads to an independent suite on the top floor, which overlooks both the garden and the street. 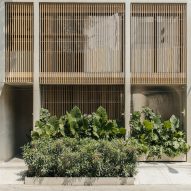 In the common area of ​​the house, the ceilings are much higher. A small gap between this timber frame and the rest of the house reinforces its distinct use and character.

Here, PPAA included plenty of space for sharing family meals or entertaining, as well as a generous outdoor seating area.

Other projects completed by the Mexico City-based company range from a stone house for two brothers “in the middle of nowhere” to a block of vacation apartments in Tulum topped with rooftop swimming pools.

Photography is by Rafael Gamo unless otherwise stated.