Kentucky running back Chris Rodriguez pleaded guilty and agreed to pay a fine and court costs beginning with his May 8 arrest. British Athletics Photo

KEnticky running back Chris Rodriguez has pleaded guilty and agreed to pay a fine and court costs beginning with his May 8 arrest. 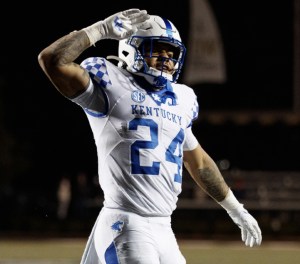 Kentucky running back Chris Rodriguez pleaded guilty and agreed to pay a fine and court costs beginning with his May 8 arrest. British Athletics Photo

Rodriguez agreed to pay a $200 fine and $700 or more in court costs, both of which must be paid in full by December 13. His driver’s license will be suspended for four to six months. Rodriguez was arrested at 3 a.m. on May 8 and charged with driving under the influence and reckless driving.

According to the arrest report, the vehicle was “not maintaining its intended lane of travel” and it took “some time” for the vehicle to come to a stop. Rodriguez was observed with “red, watery eyes and his speech was garbled” and smelled of alcohol. He was arrested and admitted to having consumed “one or two drinks” of alcohol.

At a preliminary hearing on Tuesday, he pleaded guilty to operating a motor vehicle under the influence, according to the Lexington Herald-Leader.

A warrant was issued for Rodriguez’s arrest after he failed to appear for a scheduled court date in May, but British officials said the error was made by his lawyers.

Kentucky spokeswoman Susan Lax said at the time that school officials “confirmed with Chris’ attorneys that it was a scheduling error in their office. Chris was specifically advised by his lawyers not to attend (the hearing) because they (the lawyers) were going to (attend on his behalf) They are working diligently to get him corrected.

Rodriguez is one of the best returning runners in the Southeastern Conference. He rushed for 1,379 yards and scored 12 touchdowns. He’s sixth on the school’s all-time rushing list with 2,740 yards and is on course to surpass the record set in 2018 by Benny Snell.