read the London site through a new lens

Architect Russell Jones is building a family home and studio in the London suburb of Highgate. Nicknamed ‘Wembury Mews’, the dwelling stands on a narrow site accessed by a narrow passage, which was once occupied by a garage and the rear garden of the neighboring house. While the project is set in a conservation area defined by a fabric of Edwardian homes, the built space reflects the nature of its context through a contemporary, minimalist lens.

The architecture, in particular its wooden structure and materiality, was strongly influenced by the physical access to the site. All elements had proportions and weight that could be carried or carried by hand on the narrow road.

Influenced by the residential context and the difficult site, Russell Jones designed the “Wembury Mews” dwelling to “avoid the familiar domesticity of London”. While the construction and interior design of the project meets living requirements and location, the architect notes that the house “character and atmosphere derive from memory and experience and the desire to create an escape from the outside world.’

The built space is organized over four low floors, covering 127 square meters (nearly 1,400 square feet), and occupies the width of the pre-existing garage, following the natural slope of the plot. Taking the form of a series of interlocking volumes, each room follows a 20-meter-long (66-foot-long) axis, which begins at the front door and runs through the rear which opens onto an intimate outdoor terrace. and an enclosed garden. 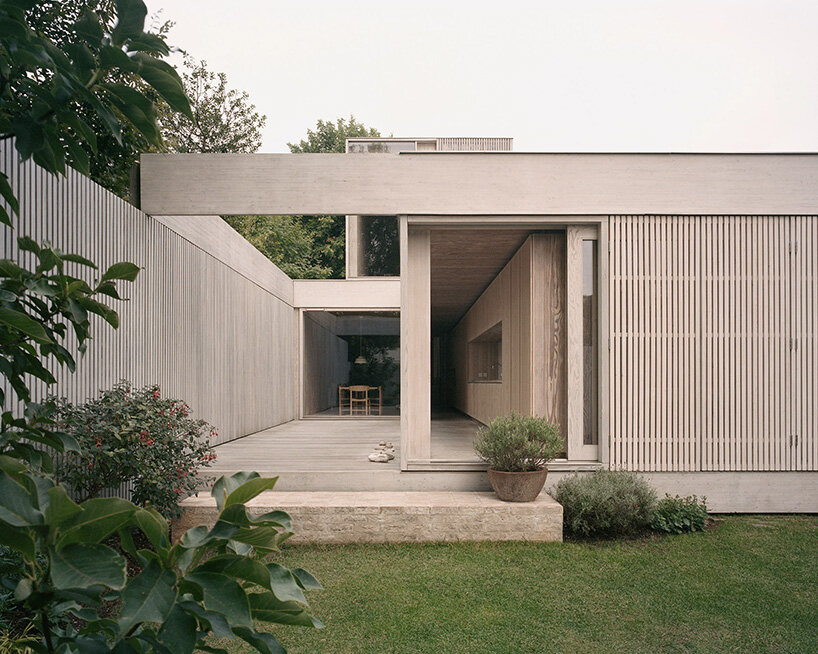 Russell Jones describes the timber frame construction of the Wembury Mews house in London: “The exterior cladding is Siberian larch. 100 millimeter wide Douglas fir planks, with flush floor, wall and ceiling joints, line all interior surfaces. The frame of the windows and the shutters are also in Douglas fir. All wood is sustainably sourced and carefully clad in stainless steel to control outdoor weathering.

“All the roofs are covered with lightweight Lipari pumice, to aid drainage and reflect heat. Furniture including desks, beds, shelves, cupboards and doors are made from the same Douglas fir planks as the interior lining. In contrast, the kitchen worktops, bathroom coffee tables and niches are coated in matt white porcelain.

“The front forecourt, paved with reclaimed granite cobblestones, matches the pavement of the mews. The garden, in harmony with the house, is informal. 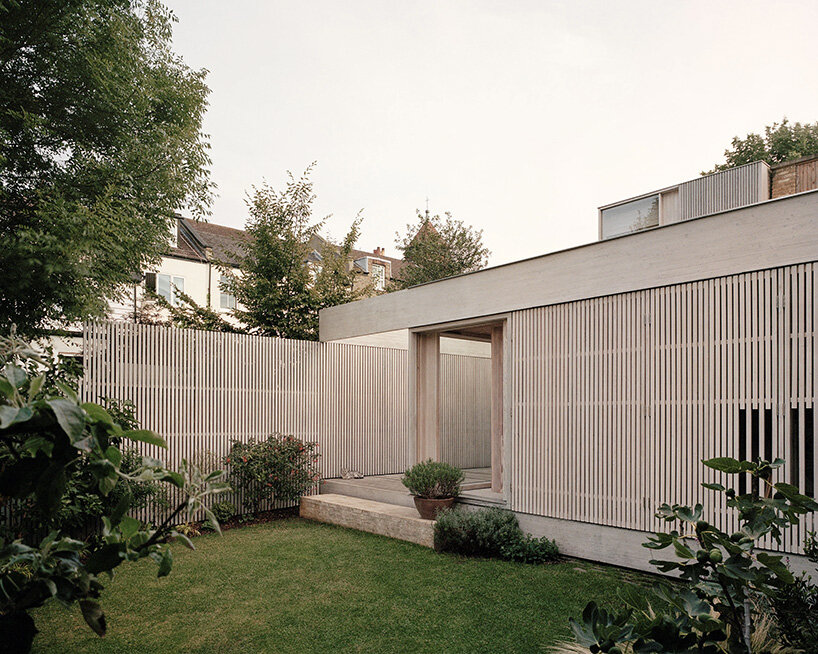 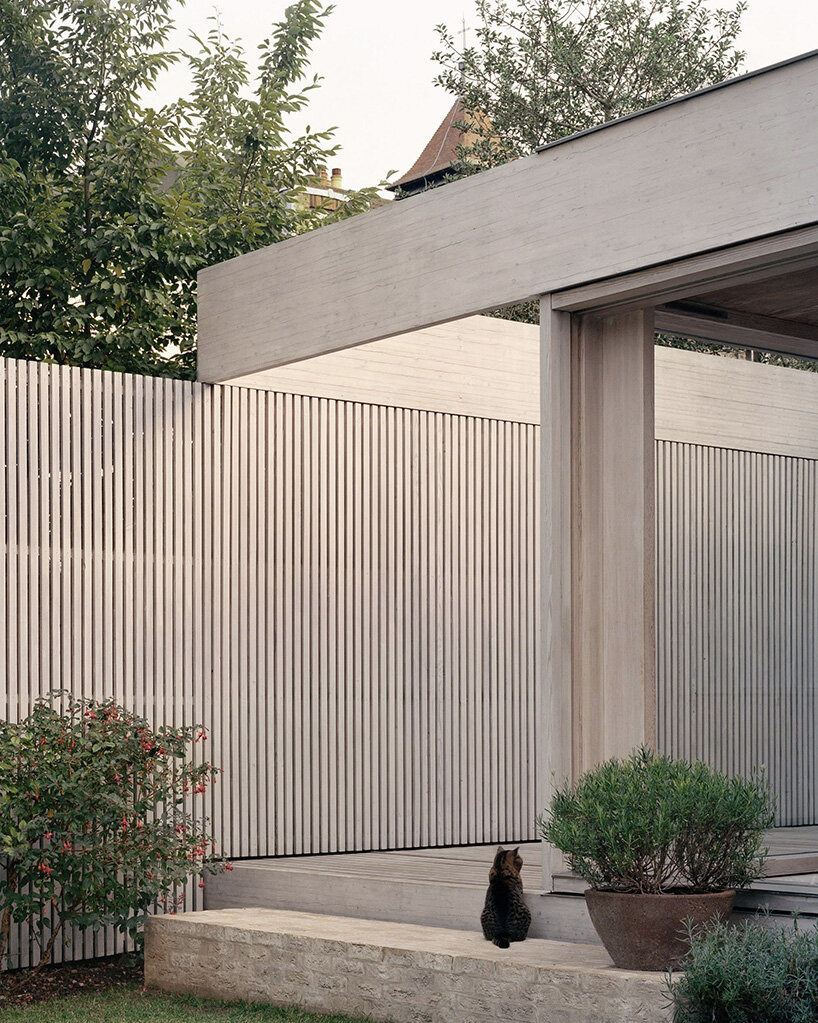 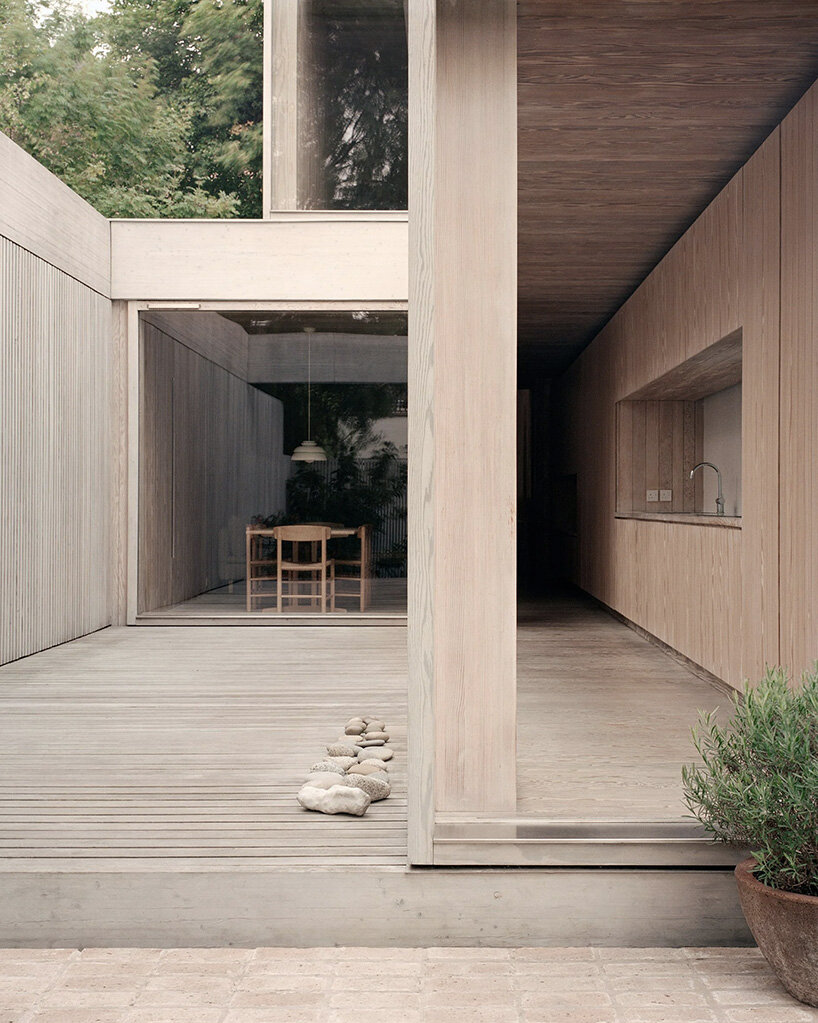