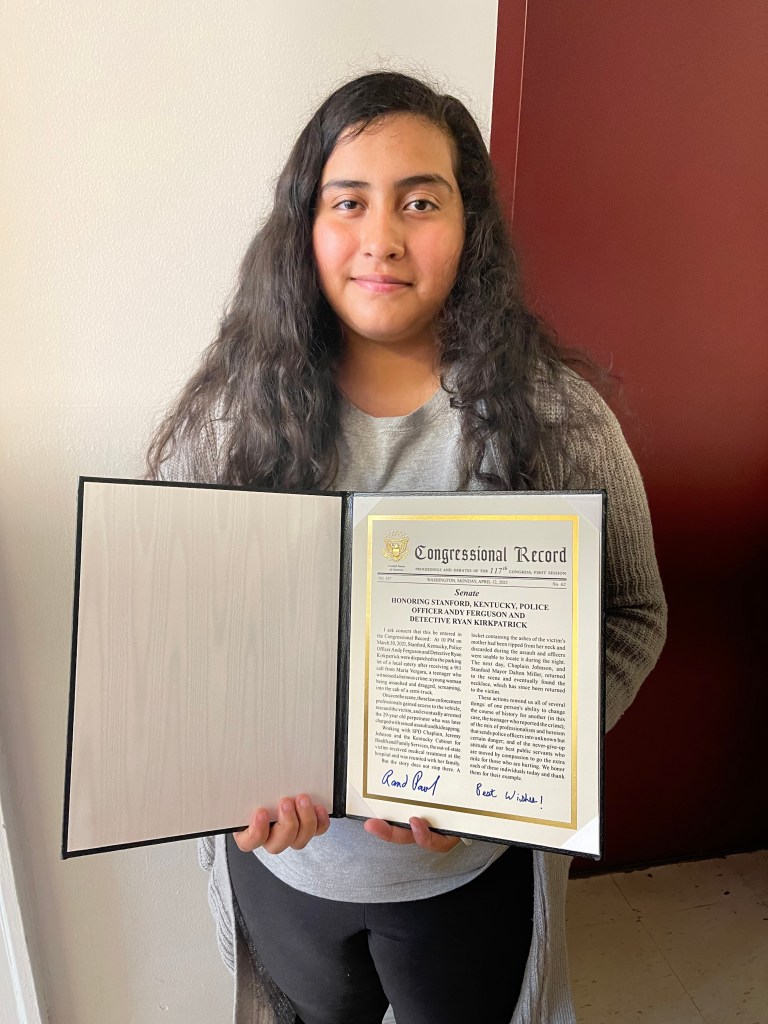 Senator Paul presented Vergara with a congressional record, set April 12 in Washington, DC, for his role in prompting a 911 call after witnessing a heinous crime at Stanford. The SPD were dispatched to the scene and were able to arrest the attacker who was later charged with sexual assault and kidnapping.

The out-of-state victim received medical attention and was reunited with his family through the heroic efforts of Maria and the Stanford Police Department.

The following is the text entered into the Congressional Record by Senator Paul.

I seek consent for this to be entered into the Congressional Record: At 10 p.m. on March 30, 2021, Stanford, Kentucky, Police Officer Andy Ferguson and Detective Ryan Kirkpatrick were dispatched to the parking lot of a local restaurant after receiving a 911 call from Maria Vergara, a teenager who witnessed a heinous crime: a young woman was attacked and dragged, screaming, into the cabin of a tractor-trailer.

Once at the scene, these law enforcement professionals gained access to the vehicle, rescued the victim and eventually arrested the 29-year-old assailant who was later charged with sexual assault and kidnapping.

Working with SPD Chaplain Jeremy Johnson and the Kentucky Cabinet for Health and Family Services, the out-of-state victim received medical treatment at a hospital and was reunited with his family.

But the story does not end there. A medallion containing the victim’s mother’s ashes had been ripped from her neck and thrown during the assault and officers were unable to locate it overnight. The following day, Chaplain Johnson and Stanford Mayor Dalton Miller returned to the scene and eventually found the necklace, which has since been returned to the victim.

These actions remind us all of several things: the ability of one person to change the course of history for another (in this case, the teenager who reported the crime); the mixture of professionalism and heroism that sends the police into unknown but certain danger; and the inflexible attitude of our best public servants who are driven by compassion to go the extra mile for those who are suffering. Today we honor each of these individuals and thank them for their example.