STANFORD — From the caves of Kentucky to the movie studios of California, Larry Johnson has made headlines multiple times in his life.

This time, the Stanford native is promoting a new Kung Fu movie he’s been working on for a year.

Larry Johnson is working on the set of Kung Fu Ghost in California. Photo courtesy of Larry Johnson

Johnson served as associate producer on the film “Kung Fu Ghost,” which will have a special premiere this weekend at Liberty.

“I met Jennifer Linch, the director of this film, on Facebook in 2016 and we had a conversation and I became friends with her over the years and when she was going to make this film I just asked her if I could be part of working on one of her movies,” Johnson said. “So when she did this one, she let me out. So I took a trip there.

Linch has won several awards for his short films, including Best Newcomer at the World Film Awards in 2015 and the International Silver Award for Directing at the International Film Competition Festival in 2015. His feature debut Kung Fu Ghost has already won multiple awards worldwide. world.

Johnson said it was exciting to be part of the making of the film.

For 18 days, Johnson stayed with the executive producer and worked on the set of the film.

“I have to operate sound on film, they let me sit down and do some sound and make it work. I also have to do the boom microphone,” he said.

Johnson said the cameraman was from France and also worked alongside him.

“And I did lighting on set, lots of lighting,” he said. “We set up the lights and hauled them out and we would go in the morning and set up all the lighting in all the different scenes and set up the track for the camera so he could roll it around when he needed to.”

Johnson even got to make the slate before the cameras started rolling.

“Also I did the backstage shot for Jenniiron, then the video too,” he said.

This isn’t Johnson’s first time working in the entertainment industry. He is well known in Kentucky for his YouTube videos filmed under the alias Kentucky Cave Creeper, in which he explores various caves in the state in search of artifacts and rare finds. Johnson was also friends with the late Neal James, also from Stanford, known as “Banjo Man,” and worked with him on the Animal Planet show “Call of the Wild.” Johnson explored several caves on the TV show and explored caves alongside the producer. 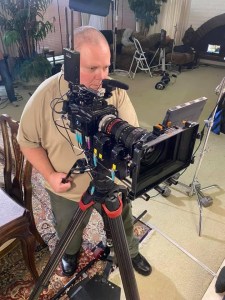 Larry Johnson behind the camera on the set of Kung Fu Ghost. Photo courtesy of Larry Johnson

He was also an extra in the movie “Seabiscuit”.

Over the years, Johnson has made many friends in the film industry, from producers to stuntmen, and one thing led to another, he said. Eventually, those connections led to Linch, whom Johnson befriended on Facebook.

Kung Fu Ghost, the story of a young woman named Daisy who inherits an estate from her late grandfather, is action-packed as Linch shows off her martial arts skills and training. When criminal treasure hunters attempt to rob the house, Daisy enlists her supernatural Kung Fu friends to protect her grandfather’s home and possessions.

The film will air at Liberty on July 30 and August 1 with one screening per day.

“I’ll do a Q&A afterwards,” Johnson said. “They’ll probably show it around 2:30 p.m., and then we’ll do a Zoom chat from California with Jennifer, the executive producer, and maybe another actor to join us.”

Johnson said he had received several offers to work on other films since working on Kung Fu Ghost and was excited to continue following his entertainment interests.

“Kung Fu Ghost” will play at the Lights of Liberty Theater on July 30 and August 1. The film is rated PG-13.

Veterans enjoy free entry. All proceeds will be donated to the theater to support local business.