The HEAT Report is a weekly newsletter focused on how members of the House Energy Action Team (HEAT) are promoting American energy security and a global energy economy.

Last week, President Biden announced that his administration would begin drawing one million barrels of oil a day from the Strategic Petroleum Reserve (SPR) in an effort to tackle his own self-created energy crisis. .

This is no joke – instead of solving this crisis by unleashing US oil and gas production, the Biden administration is unleashing oil from the SPR for the third time in recent months.

The move comes on top of President Biden unveiling his staggering $5.8 trillion budget request for fiscal year 2023, which includes $2.5 trillion in new or increased taxes with $45 billion in new taxes on domestic energy production to advance his radical far-left climate agenda that has helped fuel the highest rates of inflation this country has seen in 40 years.

To make matters worse, the American Petroleum Institute and the National Ocean Industries Association have released a new report detailing the disastrous consequences of the Interior Department’s delay in its five-year offshore energy leasing program in the Gulf of Mexico. This delay could lead to a drop in production of nearly 500,000 fewer barrels per day and a loss of $1.5 billion per year in government revenue.

Instead of waging war on American energy and handing over our energy security to dictators like Vladimir Putin, President Biden should turn to American energy producers, open up exploration and unleash our energy potential to regain energy. America’s Energy Independence.

Highlights from this week’s HEAT members: 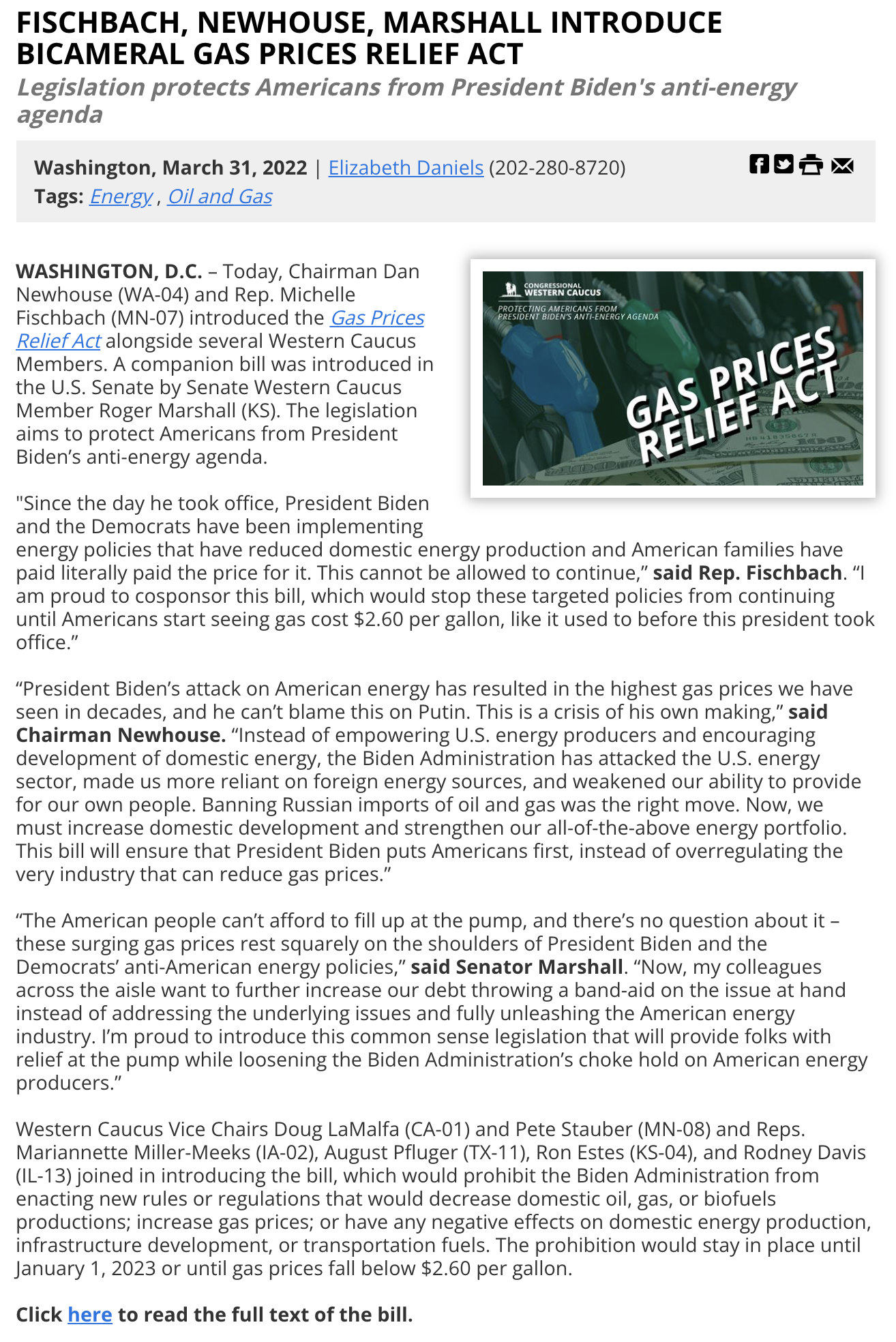 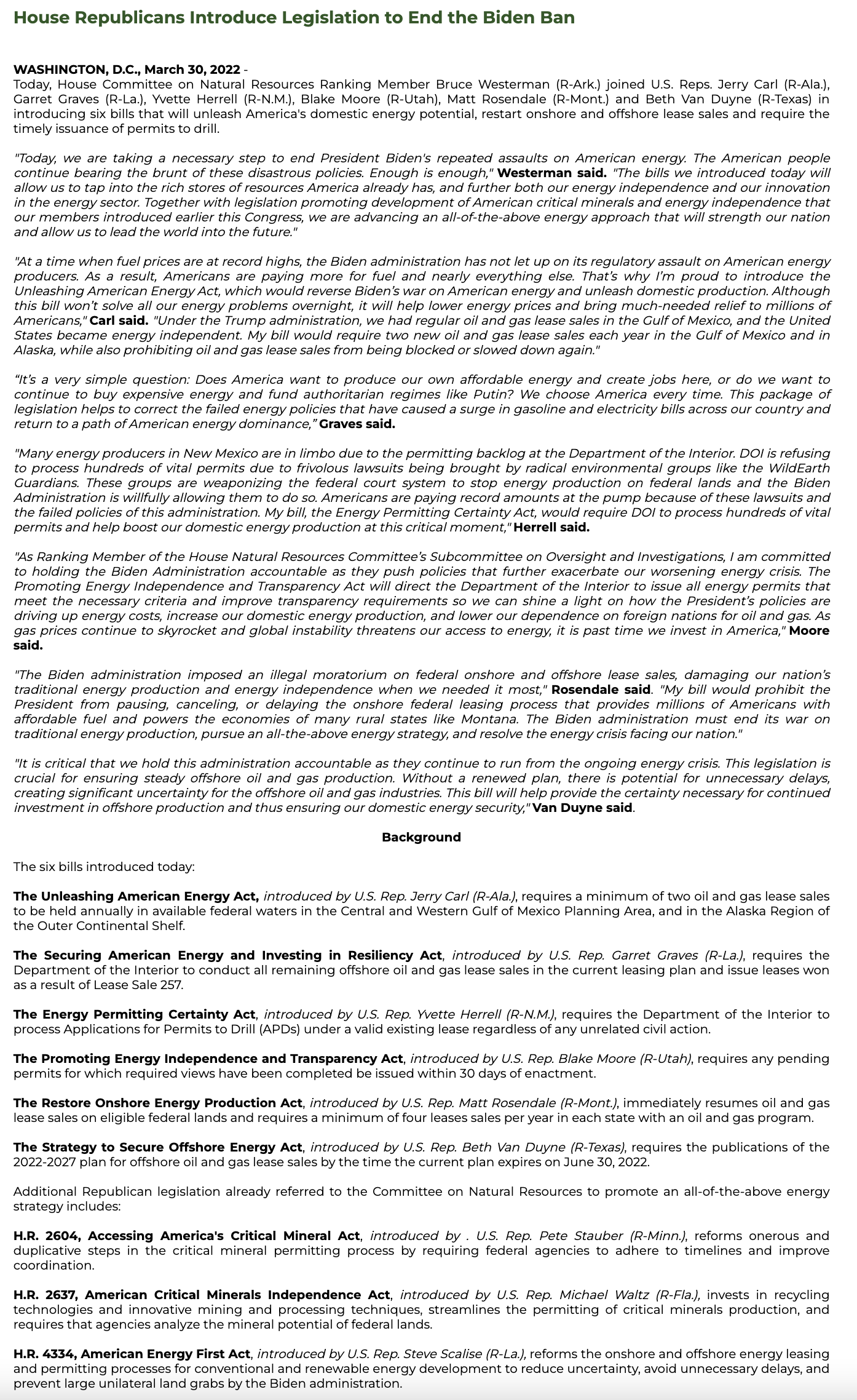 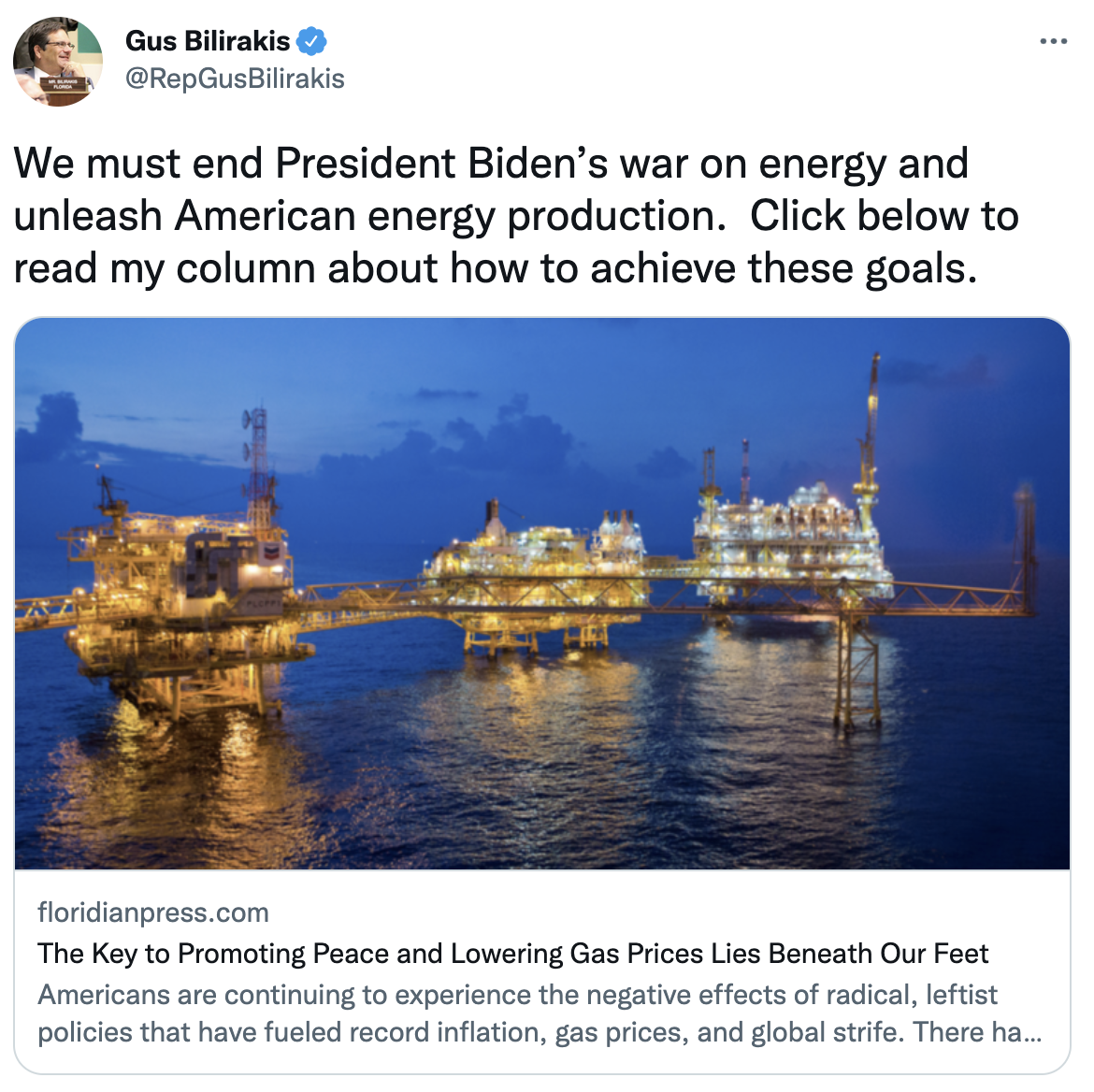 Rep. Pete Stauber (R-Minn.) introduced bipartisan legislation to ban imports of uranium from Russia. Rep. Stauber also questioned the Interior Department’s deputy assistant secretary for lands and minerals on why the Biden administration continues to obstruct onshore and offshore oil and gas development during a hearing of the deputy. -natural resources committee on energy and mineral resources. 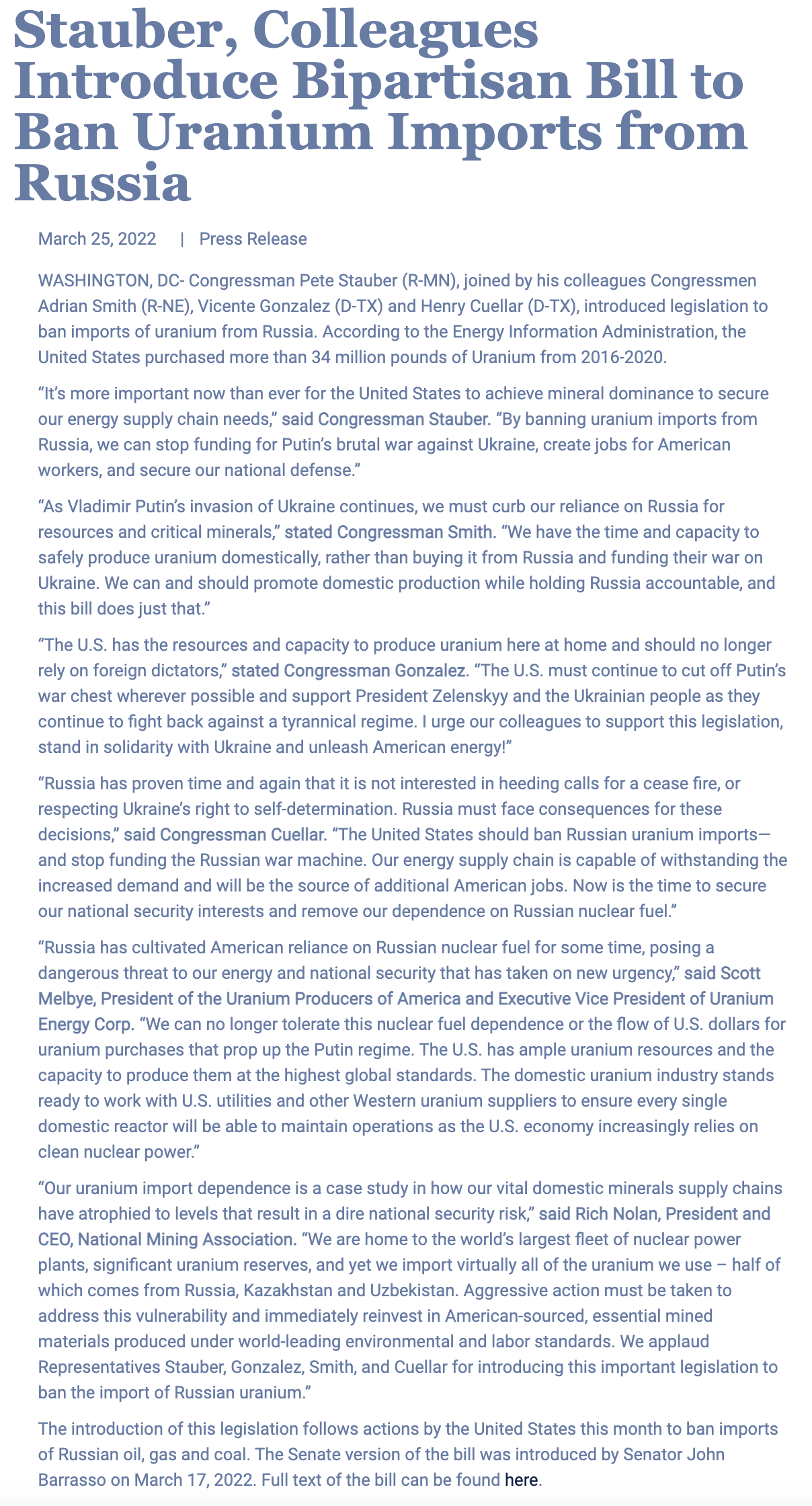 In a speech on the floor of the house, Representative Fred Keller (R-Pa.) amplified the growing concern of Americans over the rising cost of energy in the United States. 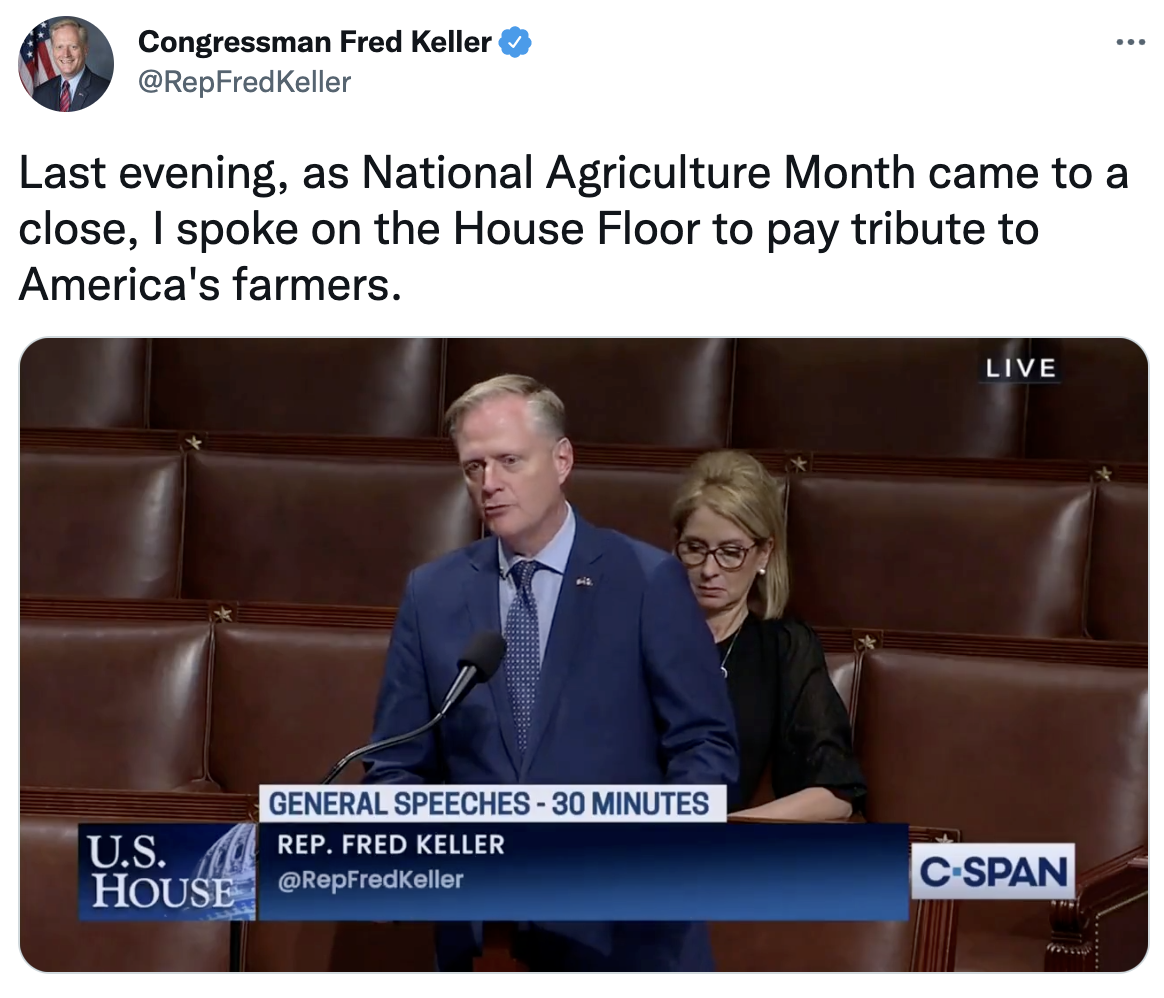 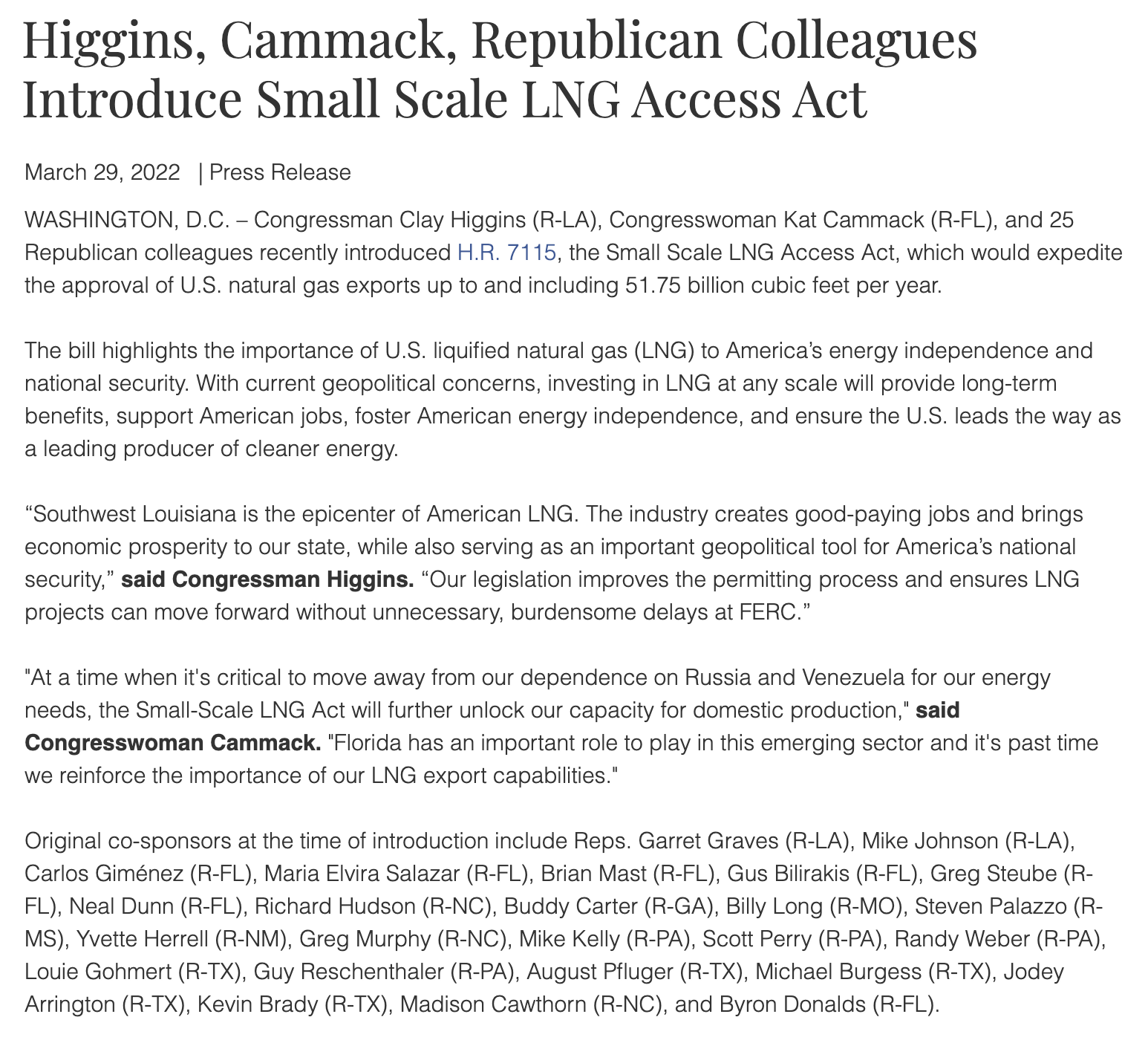 Representative John Joyce (R-Pa.) spoke on the House Floor about skyrocketing gas prices and noted that hard-working Americans are paying the price because of President Biden’s policy failures. 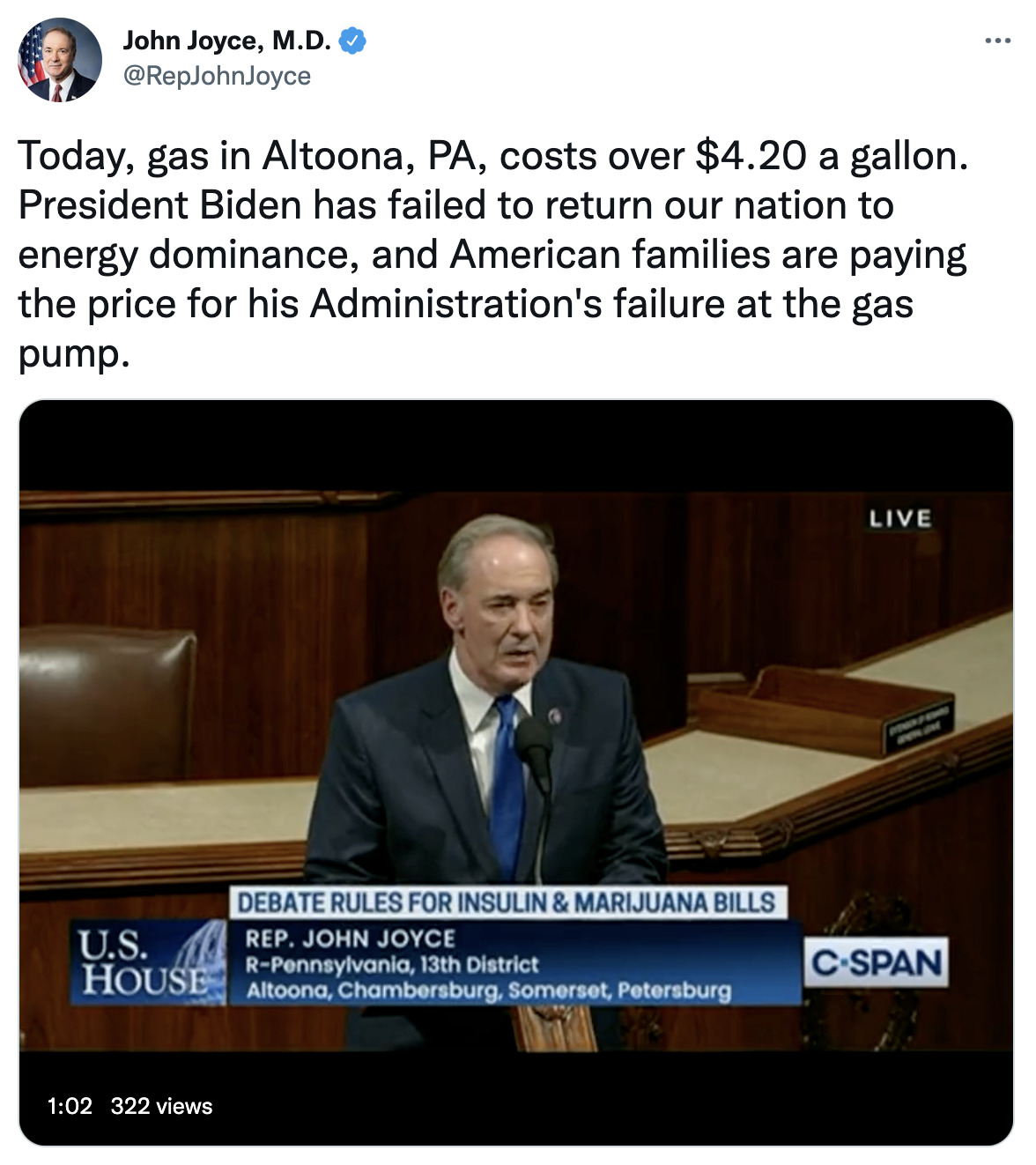 Representative Bob Latta (R-Ohio) released a statement on President Biden announcing the release of one million barrels of oil per day from the Strategic Petroleum Reserve. 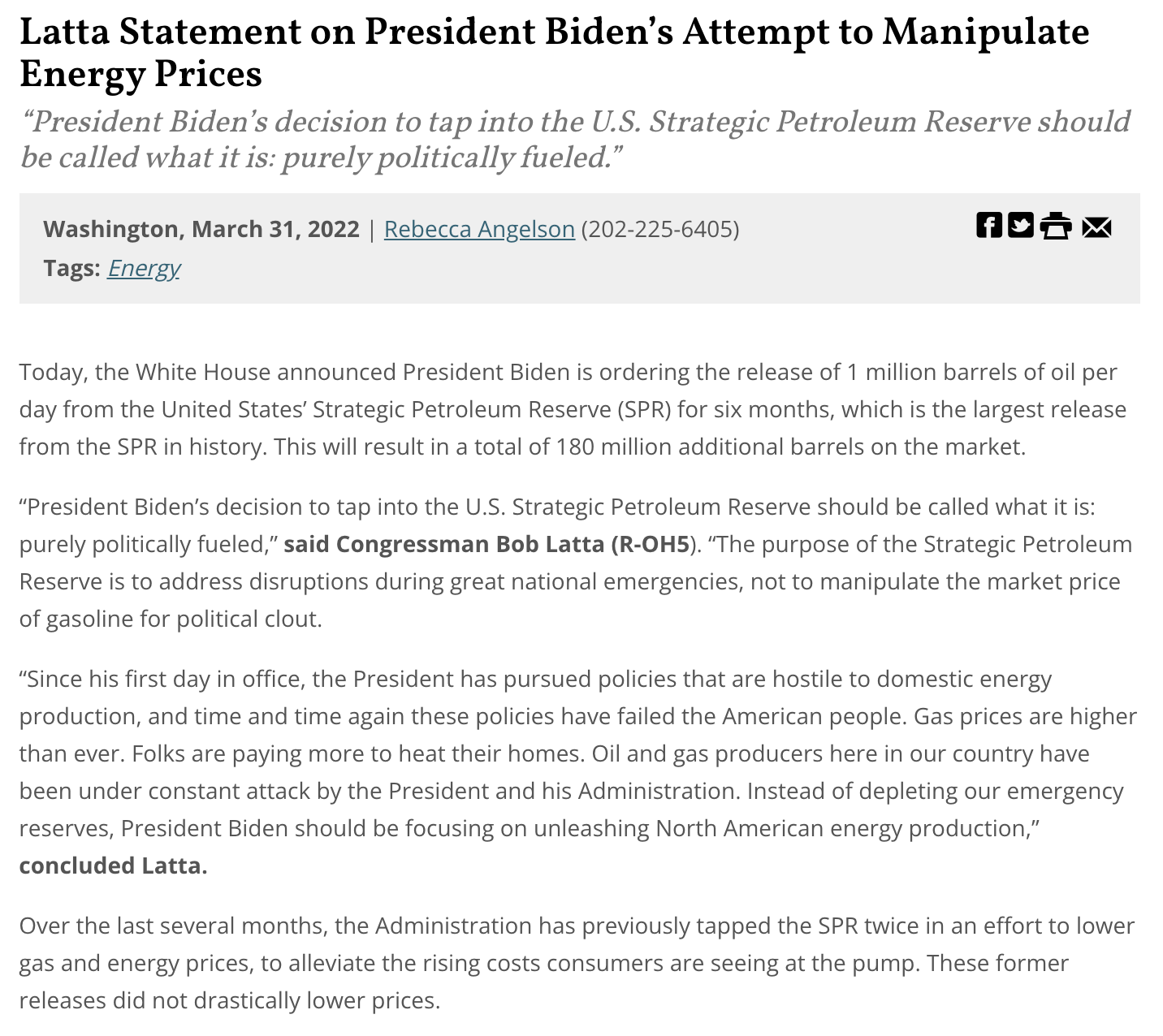 The response on social media: 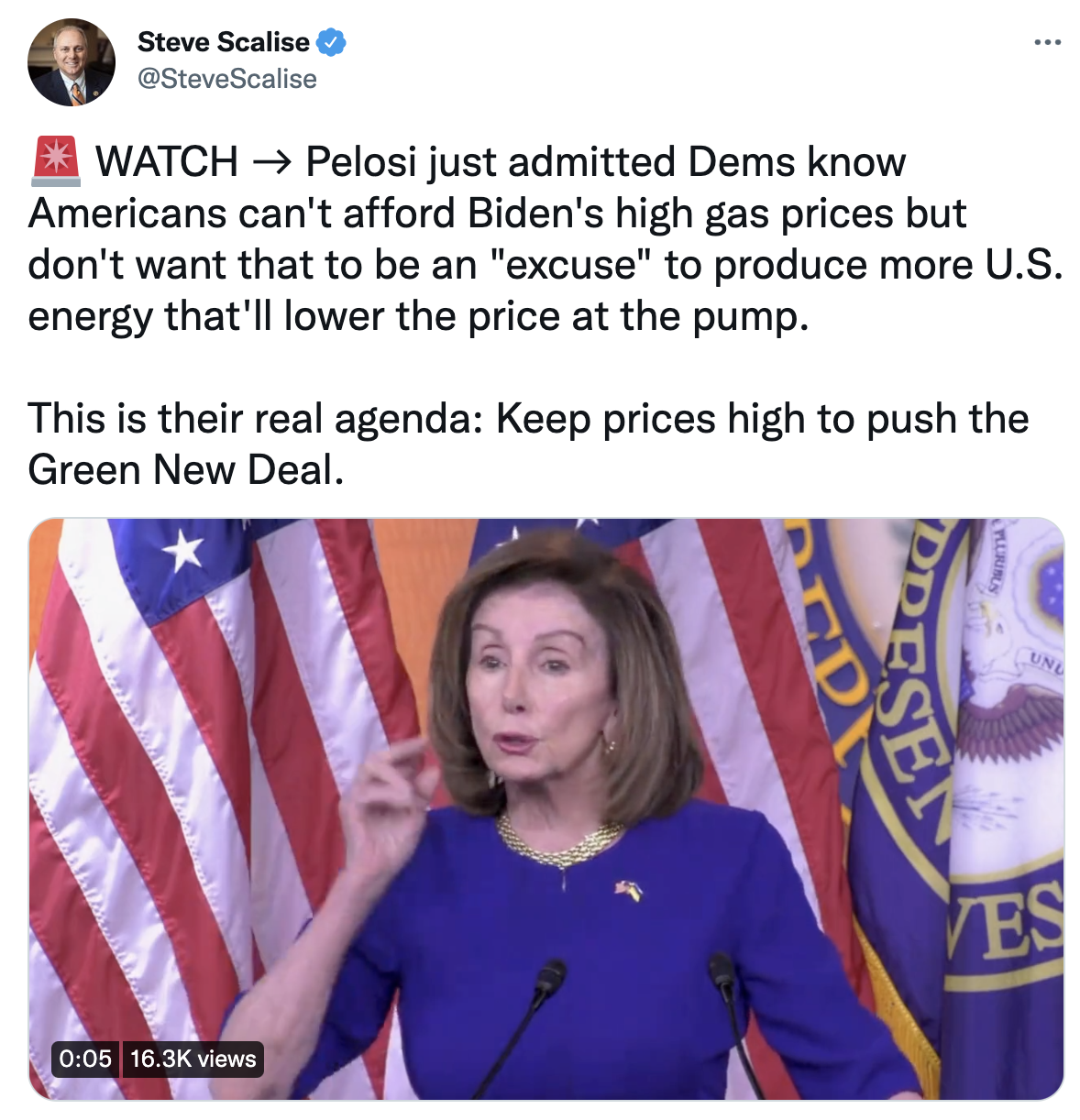 Co-Chair of HEAT Rep. Jeff Duncan (SR.C.) lambasted President Biden for waging war on American energy since his first day in office. Americans cannot afford President Biden’s latest US policies that have resulted in steadily rising gas prices every month of his presidency. Rep. Duncan also criticized the Biden administration for tapping into the strategic petroleum reserve. It is not the solution to the energy crisis and covers President Biden’s self-imposed energy crisis and the war on American energy. The solution to reducing energy costs for Americans is to unleash domestic energy production. 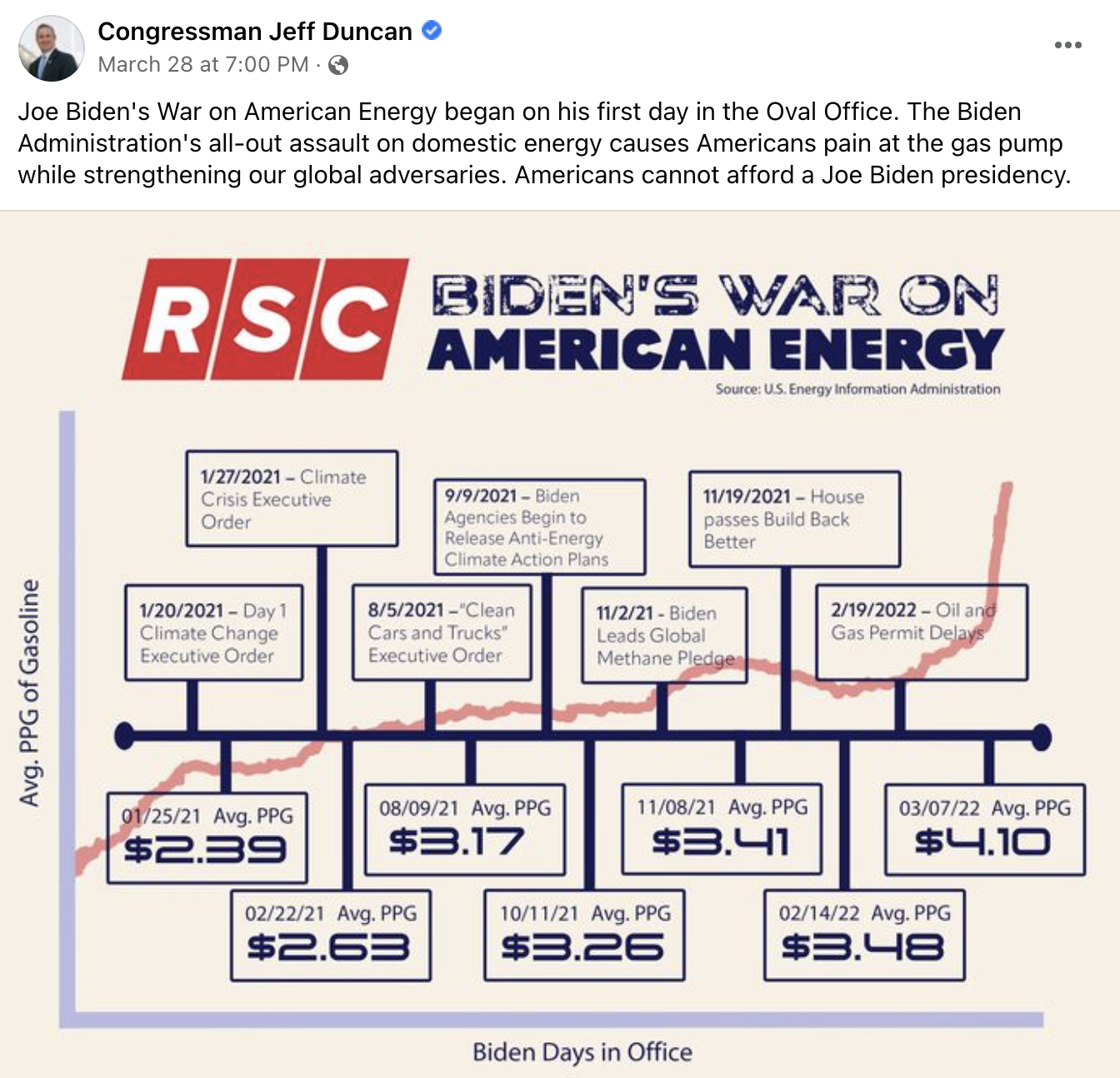 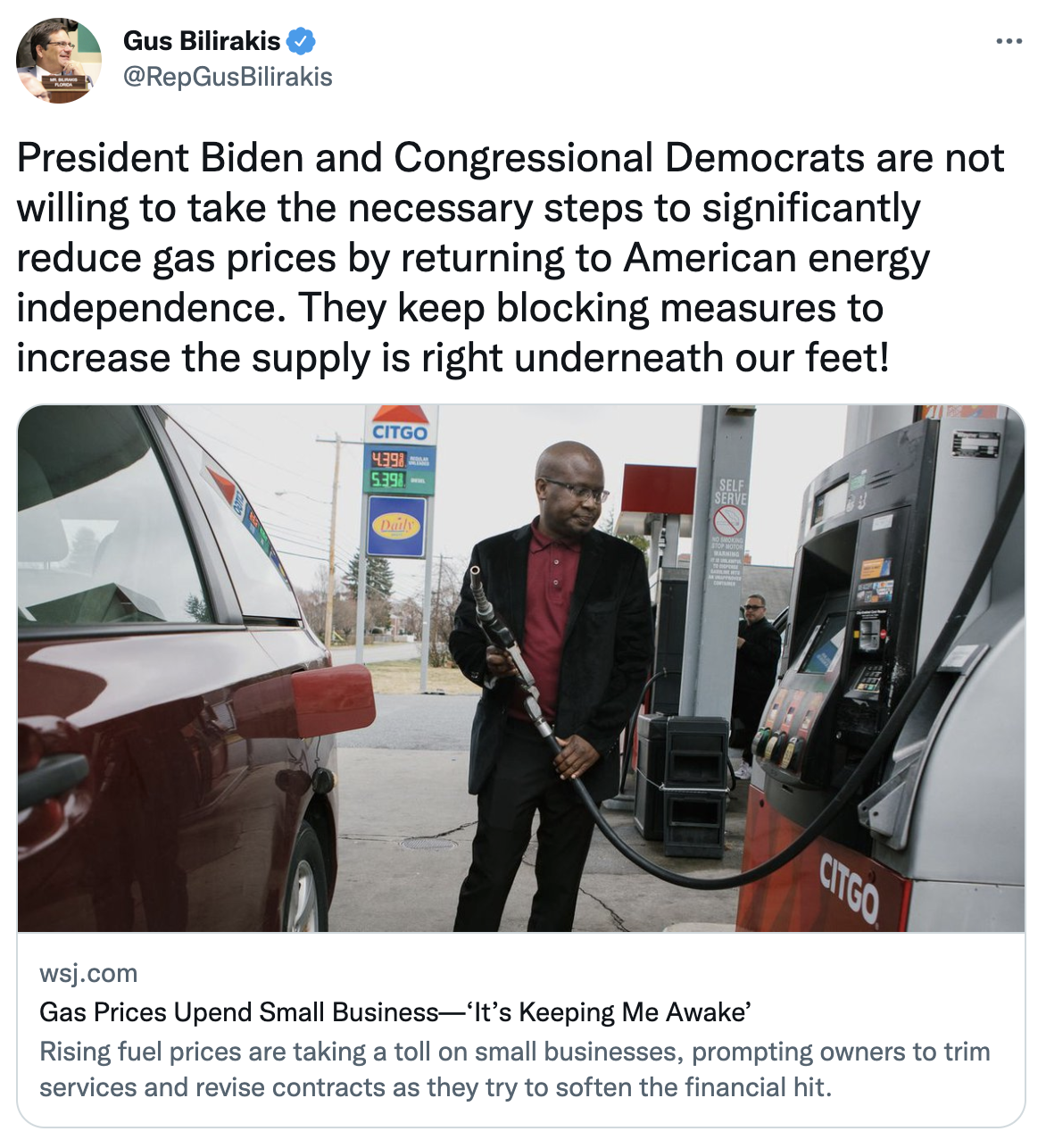 Representative Stephanie Bice (R-Okla.) called on the Biden administration to unleash the full potential of American energy instead of tapping into American oil reserves. 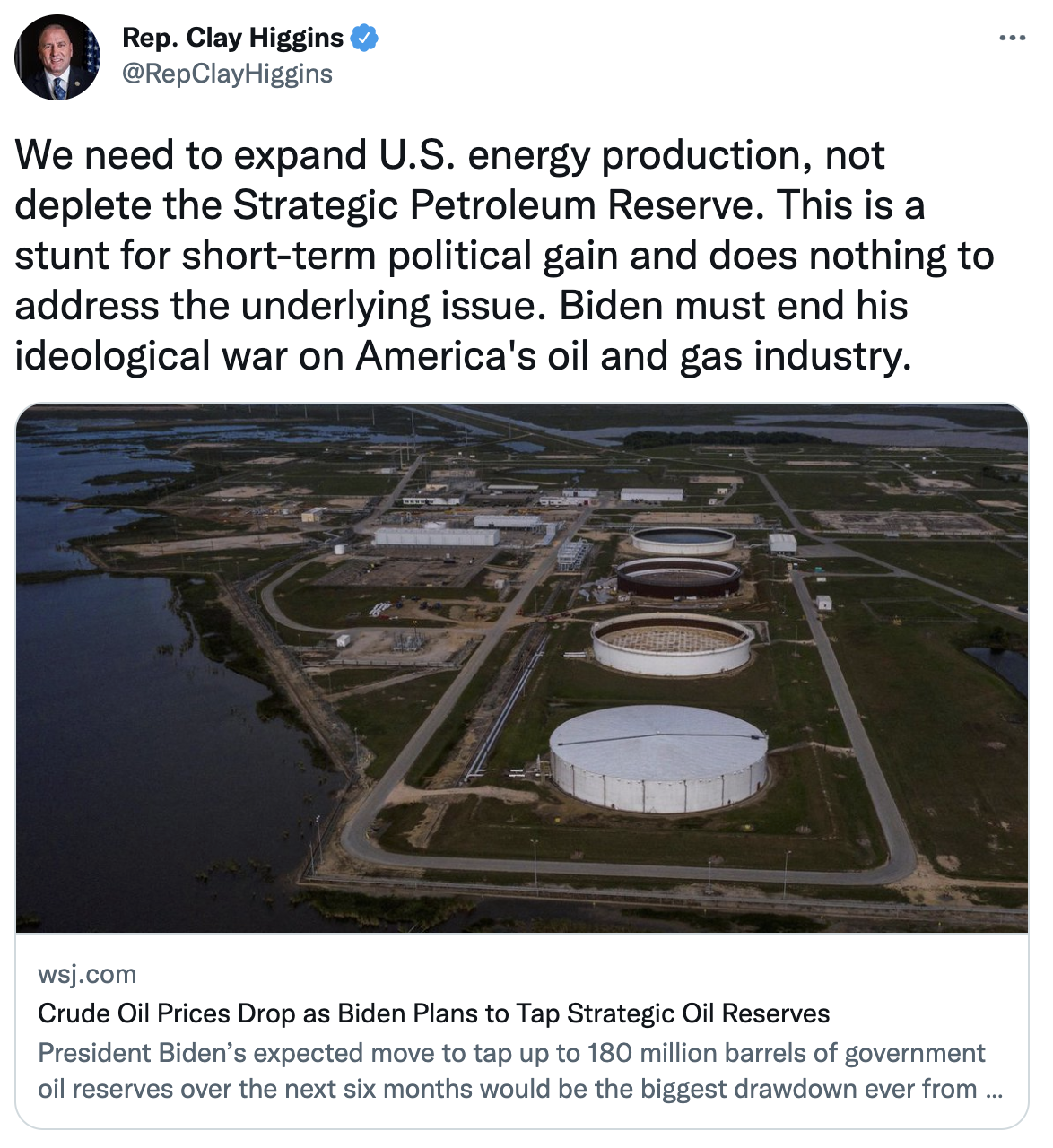 Representative French Hill (R-Ark.) pointed out that the Biden administration is choosing not to increase energy production levels because it wants to appease the radical left through a Green New Deal program. 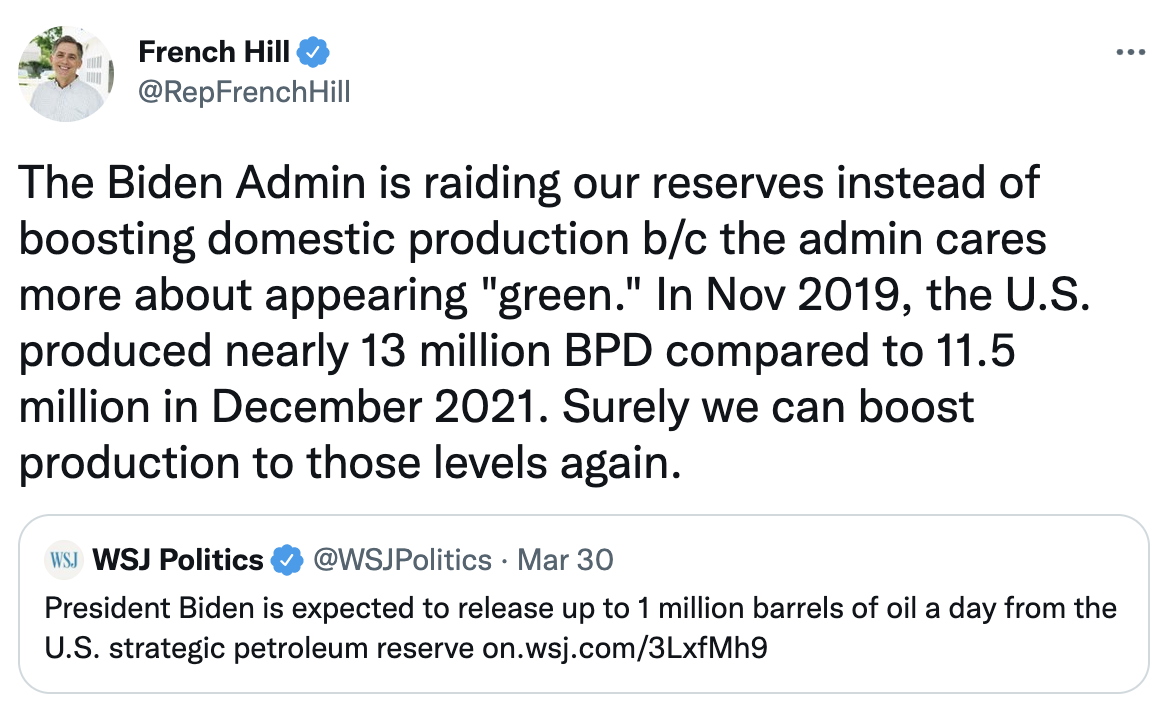