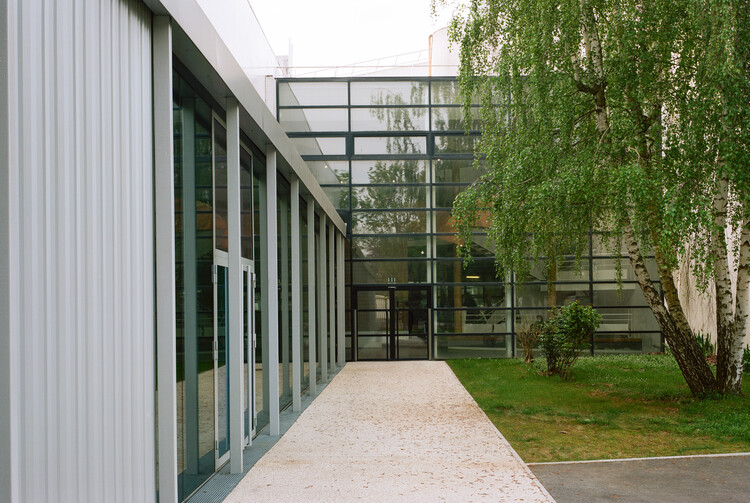 Text description provided by the architects. Located on the Aubergenville plateau overlooking the Seine shortly before Mantes-la-Jolie, the Vincent Van Gogh high school is located not far from the city center between fields, a suburban area, and a large social housing complex. It was designed by the architect Jean-François Laurent and inaugurated in 1991.

The building emerges from the cultivated plains to culminate towards the hall, the highest point identified by its urban forecourt. A star-shaped organization distributes 3 antennas which successively house the administration with the artistic and linguistic poles, the scientific service, and a catering of 600 covers which is organized in 7 dining rooms distributed around a refrigerated fountain.

The restoration restructuring project consists of a new habitable thickness on the outskirts of the existing building with a width of 2m. It integrates the student entrances and exits, gains in surface area and offers a new glazed facade on the forecourt allowing through views. The project can be read through the following themes: access and organization, rationalization and hierarchy of space, light and spatial quality.

The kitchen, preparation and storage are organized on the west facade in a sideboard thickness. The kitchen takes advantage of the existing delivery and access to waste on Pierre Legland Street. This organization frees up a large cross-sectional space for the student dining room, which makes the most of natural light. Thus the Lycée has a large modular dining room that can be organized according to different configurations, with modular partitions even if it means temporarily becoming a conference or meeting room.

In order to optimize the entrance and exit flows which are currently congested at a single point, the project proposes an extension of approximately 2m of the three facades on the ground floor, in the form of a covered and closed gallery.

This new habitable thickness makes it possible: – to solve the problems of waiting by channeling the flows of the pupils, for a better organization and circulation of the flows, to free the plan and to open the dining areas, to offer more surface than the existing footprint for a controlled price, offering largely glazed facades at both ends of the dining room in order to offset the depth of the space in light, to give clarity and coherence to the project.

The extension gallery adds a plinth to the ground floor of the building. The project offers visual transparency from east to west, as well as an identity and a new readability. In addition to this transversality, the gallery goes around the building to offer light and space, both for the technical spaces and for the active spaces.

Light is the main subject of the project. The new half-board project takes advantage of working with natural, artificial, direct or indirect light. Thus the large dining room benefits from a generous supply of natural light at both ends (east and west facades), as well as from the existing skylight which is preserved and which brings light to the heart of the space. As the sun can enter in the morning before the first service via the east facade, we offer external blinds which will be raised for lunch. In winter, the dining room can take advantage of the sunshine to warm the room.

A grid of steel posts punctuates the new facades on the periphery of the existing building. The facades are organized according to the program, offering large openings that reveal the interior volumetry. The east and west facades (dining room) are fully glazed to allow light to penetrate deeply, while the kitchen facade is clad in metal cladding panels.

An active ceiling composed of alternating slices of larch encrusted with a melamine-type acoustic baffle makes it possible to adjust both the acoustics (diffraction phenomenon and absorptions) and the light by inlaying a luminous line. This ceiling provides a bright and warm surface that floats above the students. This technical ceiling integrates all the air outlets and inlets. The vertical walls along the dining spaces are treated with a translucent material often used in half-boards, providing light and reflection effects that give depth to the space.

The project improves the building’s energy efficiency through exterior insulation to eliminate thermal bridges. The roof, which has many leaks, is restructured. We proposed to heat the dining rooms by the floor, which ensures a more homogeneous and comfortable heating. The completely restructured kitchen and half-board can accommodate a population of 850 diners, but can also cope with the increase in the population of half-boarders and diners.

The project reactivates a low volume devoid of light which extends over its limits and increases the surface area of ​​the equipment, without touching the upper floors. It proceeds by lateral expansion and extrusion, offering the minimal but necessary thickness to breathe new life into existing spaces and totally requalify them. It’s a new envelope, a subtle device that works in contrast to the existing frame.